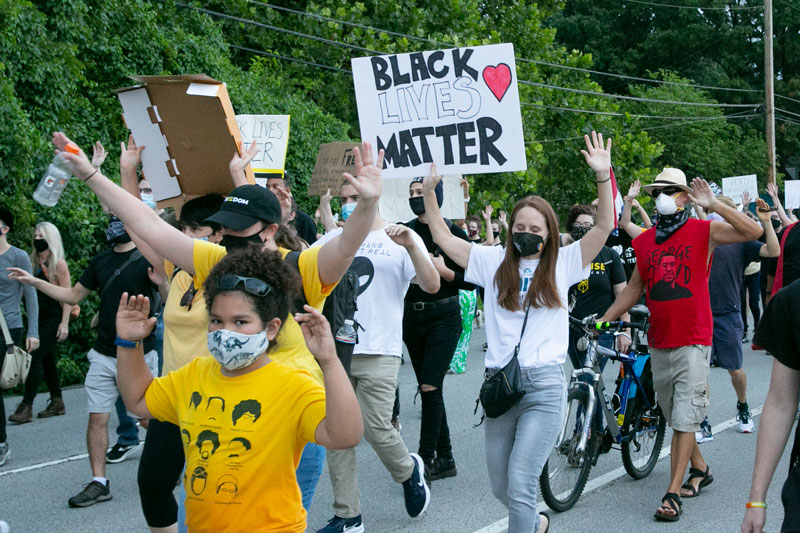 The diversity task force was created after a summer of marches and protests in Prairie Village, such as the State Line Road march pictured above. Although the task force is looking into all types of diversity such as racial, religious and sexual orientation, a main focus is attracting and retaining racially diverse residents. Fie photo.

This is Part 1 of a three-part series examining Johnson County’s history of racist housing policies and the impact those policies still have on our community today. Look for Parts 2 and 3 on Wednesday and Thursday.

Widespread protests following the killing of George Floyd have sparked a wave of reckoning with structural racism in the United States this summer. And some local leaders believe the nationwide movement provides an opportunity for Johnson County to better come to terms with its own racist past.

“As much as we’d like to, we can’t deny that Johnson County has benefited from historic racial injustice and continues to do so,” County Commissioner Janeé Hanzlick said at a meeting in June. “People need to recognize our county is in many ways built on racism…Every day black people in Johnson County have to live with the assumption they don’t belong here.”

Indeed, the history of racism in Johnson County is as old as the county itself: The county was founded by the Rev. Thomas Johnson, an assimilationist slave-holder. Even so, the forces that made the county what it is today took hold later, around the turn of the 20th century. That is when well-off white families, weary of Kansas City’s increasing industrialization, started moving a few miles to the west, over the state line between Missouri and Kansas, into present-day northeast Johnson County.

His name was J.C. Nichols, and his innovative approach to development shaped the housing industry — not just in Kansas City, but nationwide.

Writing in Wide-Open Town: Kansas City in the Pendergast Era, architectural and urban historian Sara Stevens details how Nichols’ projects made unprecedented use of extravagant aesthetics in Kansas City — wide, winding streets lined with trees and Romanesque fountains — to craft “a new kind of picturesque suburbanism that contrasted with the dirty, harsh conditions of early twentieth-century American industrial capitalism.”

But Nichols also made new use of the law to make this exclusivity a permanent reality, in the process ensuring demographic homogeneity and racial segregation in his developments that has never truly gone away.

Two of the most damaging policies were redlining and racial deed restrictions. Redlining is the process by which appraisers and realtors like Nichols worked within the Federal Housing Administration to systematically deny home loans to people of color. Non-white communities were outlined in red (hence, “redlining”) on investors’ maps to discourage lending, which meant that Black and Latino families in the metro had little chance of buying a home in one of Nichols’ developments ‒ in turn, preventing these families from building intergenerational wealth.

In addition, neighborhood homeowners’ associations (popularized by Nichols and copied frequently elsewhere) made their residents legally and socially liable if they chose to sell their homes to Black buyers. They accomplished this by embedding racial deed restrictions in homeowners’ contracts that forbade sales to “inharmonious racial groups,” including Blacks, Jews, and many others.

Legal practices like Nichols’ deed restrictions were copied by developers across the country in the growing, mostly white suburbs of America in the 1930s and decades beyond.

But racism in the housing industry did not originate with J.C. Nichols, nor was he the sole perpetrator.

Other developers like the Kroh brothers also used deed restrictions and housing covenants to keep Black families out of their neighborhoods. The Krohs developed Leawood in 1948, a municipality that is still just 1% Black. Nonetheless, most realtors across the country by the middle of the 20th Century were using deed restrictions that Nichols normalized, within the structure of homes associations whose widespread use he catalyzed.

In 1948, the U.S. Supreme Court ruled racially restrictive covenants were unenforceable and they were subsequently outlawed. The practice of redlining was also officially banned by the Federal Housing Act 20 years later. But much of the damage had already been done. Discriminatory language is still present in several Kansas City-area HOAs today.

Even if court rulings and legislation put an end to these practices, their impacts persist. Today the U.S. Census Bureau estimates that only 5% of Johnson County residents are Black. In some areas, the proportion is even smaller: in Prairie Village, Mission Hills, Westwood and Fairway, Blacks make up less than 1%. (In comparison, 13.4%  of the United States identifies as Black according to the U.S. Census Bureau.)

In turn, Johnson County has diversified at a slower rate than the rest of the country. The national African American population grew from 10.5% in 1960, to 12.6% in 2010. By comparison, Prairie Village’s Black population has changed negligibly over the same time, with African Americans comprising 0.2% of its population in 1960 and just 0.6% in 2019.

Mission Hills actually saw a decrease, from 1.6% in 1960, to less than 1% today. These figures demonstrate how racist housing policies, conceived and carried out decades ago, have effectively and enduringly excluded people of color from Johnson County ever since.

This isn’t to say that no efforts have been made to correct those trends, however. Several local community leaders throughout Johnson County’s history have made concerted efforts to take on the lingering effects of structural racism.

In part 2 of this series on Johnson County’s racial history, we’ll take a look at a prominent church’s stand on desegregation, and a Black realtor’s mission to diversify the suburbs — and why these efforts weren’t more successful.