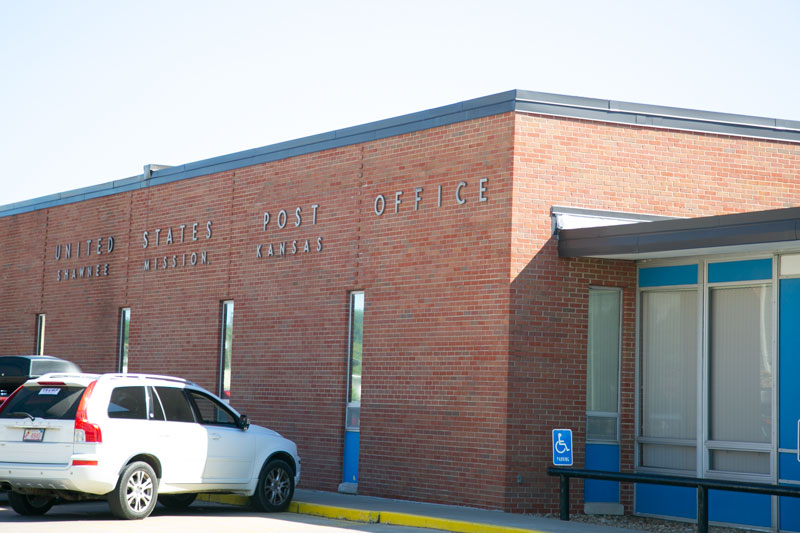 Rep. Sharice Davids is calling for the removal of Postmaster General Louis DeJoy, who she said has implemented policies that are predicted to delay United States Postal Service operations amid the upcoming general election. Above, the Shawnee Mission Post Office at 60th Street and Broadmoor.

U.S. Rep. Sharice Davids of Kansas is among the Democrats in Washington calling for the removal of Postmaster General Louis DeJoy, as a national controversy over the U.S. Postal Service continues to mount.

Davids, a first-term Democrat, also says she supports House Speaker Nancy Pelosi’s move to call the House back to session early to attempt to block the Trump administration’s overhauls of the USPS.

“I will not stand by while this President and his cronies try to tear apart this constitutionally-mandated and extremely popular institution piece by piece in order to serve their political agenda,” Davids said in statement late last week. “The American people have lost all faith in DeJoy’s ability to lead the Postal service, and he must be removed immediately.”

Under DeJoy, the USPS has instituted several recent measures — including cutting overtime for postal workers and removing mailboxes in some locations — that critics say could slow down the national mail system at a critical time during the coronavirus pandemic, and months ahead of November’s presidential election, when a record number of voters are expected to cast ballots via the mail.

“The Postal Service is critical to our economy, our seniors and veterans who count on lifesaving medications, our small businesses that need to ship their products, and even to our democracy,” Davids said in her statement. “It also employs nearly half a million Americans, many of them veterans like my mom, who have risked their lives during this health crisis to make sure people all over the country have the supplies they need.”

Over the weekend, the Kansas City Star reported that two mail-sorting machines, which can process tens of thousands of pieces of mail an hour, were taken offline in Kansas City, Missouri, along with two others in the region, one in Wichita, Kansas, and another in Springfield, Missouri.

Such moves have heightened fears the Trump administration is trying to make it harder to vote by mail in November.

“Amanda Adkins supports Kansas voters’ ability to securely cast their ballots via mail, if requested, or in person. We have faith that Kansas elections will continue to be efficiently administered in accordance with state and federal law,” the statement said.

The August primary election had a record-breaking 90,000 Johnson Countians request mail-in ballots, and Davids said more people than ever before are expected to vote by mail in November. Mail-in ballots accounted for 56% of total ballots cast in Johnson County during the Aug. 4 primary, which had a record turnout of 35%.

The county reported a 79% return rate on mail-in ballots. Johnson County Election Commissioner Connie Schmidt told the county commission during the official election canvass last week that turnout could double in the general election. She said 100,000 mail-in ballot applications had already been received by her office.

Postal clerks at two separate USPS locations in Mission said Monday they are unaware of any current delays in their operations despite the recent furor.

The Johnson County Election office has outlined three different ways voters can cast their ballots: voting by mail, voting early in person and voting in person on Election Day.

The county’s election office says for voters’ mail-in ballots to count in November, their ballots must be postmarked on or before Election Day, Tuesday, Nov. 3, and received no later than three days after Election Day.

Have you noticed changes to postal service? Let us know

Have you noticed any changes with your mail in recent weeks? Have you had any trouble getting mail sent or delivered? If so, we’d like to know about it. Email us at stories@shawneemissionpost.com.