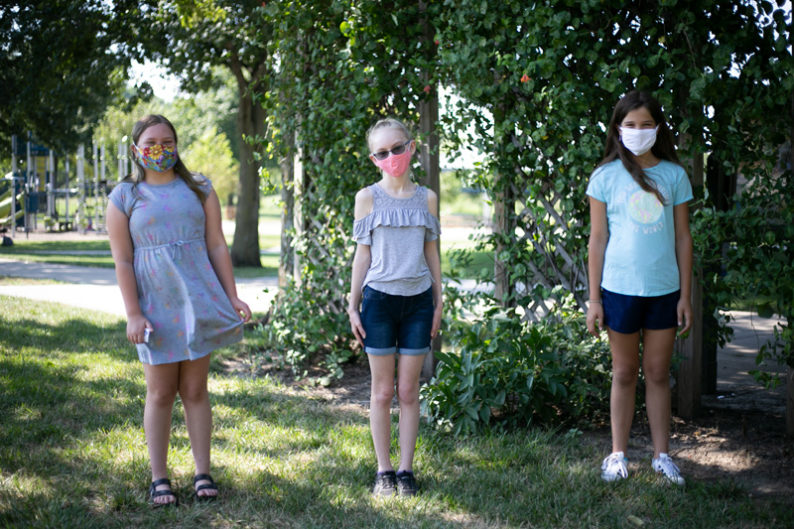 Christa McAuliffe Elementary students (from left) Reese Kring, Emily Nelson and Palmer McLaughlin, have started their own club to support causes they care about, such as environmental issues, animal welfare and civil rights.

Three students at Christa McAuliffe Elementary in Lenexa have started a club to raise awareness and support for various causes, ranging from environmental issues to animal welfare to civil rights.

At 10 years old, Emily Nelson, Reese Kring and Palmer McLaughlin, have already developed a passion for wanting to find sustainable solutions to some of the world’s most intractable problems. In pursuit of these interests, they established Girls with a Cause — nicknamed GWAC — a club named in such a way that they can pursue various causes as they arise.

“We wanted to support a lot of things, like LGBTQ+ and Black Lives Matter, and anti-pollution and climate change, animal rights,” McLaughlin said. “We thought that we could do a little bit of each.”

Kring first got the idea when she wrote a letter to her principal with concerns that the fast food chain Chick-fil-A was giving charitable donations to groups that opposed same-sex marriage. Once McLaughlin and Nelson got involved, they had their first meeting in fourth grade, just before spring break.

Then COVID-19 happened, putting a temporary stop to their activities. They only recently started meeting in person again, though with social distancing and face masks.

Each of the girls now has her own cause to pursue. McLaughlin is an animal lover, so she wants to support causes for animal welfare, such as efforts to stop dog fighting and poaching of endangered species.

The girls, who are all white, also say they want to uplift, value and support their friends of color, as well as their friends who identify with the LGBTQ community.

“Especially since we’re kids, adults most of the time think oh, they probably don’t know about some of that stuff, but, I mean, we do,” Kring said.

“We all care about the future, and we’re just trying to make it the best we can,” Nelson added. “We just want to plan a good future for us, the next generation.”

“And actually, we’re not doing this to be cute,” McLaughlin concluded. “We’re really trying to help the earth and the beings on it.”

Some of their first plans are to plan a “kindness rock garden” at school, in which their classmates can paint encouraging messages on rocks. They also plan to utilize some empty flowerbeds at school for a real garden. They hope to plant milkweed to create a habitat for Monarch butterflies.

Part of these plans stem from their current focus on climate change. Eventually, they’d like to see climate change added to their curriculum at school. To get more information on local initiatives for climate change, Nelson attended a Lenexa City Council committee meeting last month, where she learned about how the city is trying to do its part with the Climate Action KC playbook.

After introducing herself and the club, Nelson met Councilmember Julie Sayers, engagement chair for the coalition, who invited the club to learn more about the city’s greenhouse, native plantings and sustainable initiatives within the city’s municipal services department.

“I was just really happy to see these young people who are passionate about the environment and climate and working on solutions locally,” Sayers said. “So I wanted to facilitate some exposure and education for them. After we do this, then they can go start their own initiatives in their homes and schools and do it on their own.”

The club last week toured the city’s greenhouse with Sayers as well as Nick Arena, municipal services director and his staff. The girls learned about native plants and wildflowers and got some ideas for the flowerbeds at their school.

Some of the parents accompanied their daughters on the greenhouse tour.

“They have the passion to do more for the environment, for people, for anything that they see — if someone is struggling — they want to do better for the world,” said Christen Kring, Reese’s stepmother. “And that’s what this group is about: empowering young girls and having them reach for a goal that they feel passionate about. We’re extremely proud of them for doing that, for forming a group and getting other girls involved.”

Eventually, the club members hope to launch a website to help raise awareness for their causes and possible fundraising, and gain more interested and active members.

“I think, in the future, we all just want to make the world a better place,” Kring said. “There’s no Earth 2.0. There’s no Planet B. We want to make it a happy place to live, and not a dump.”