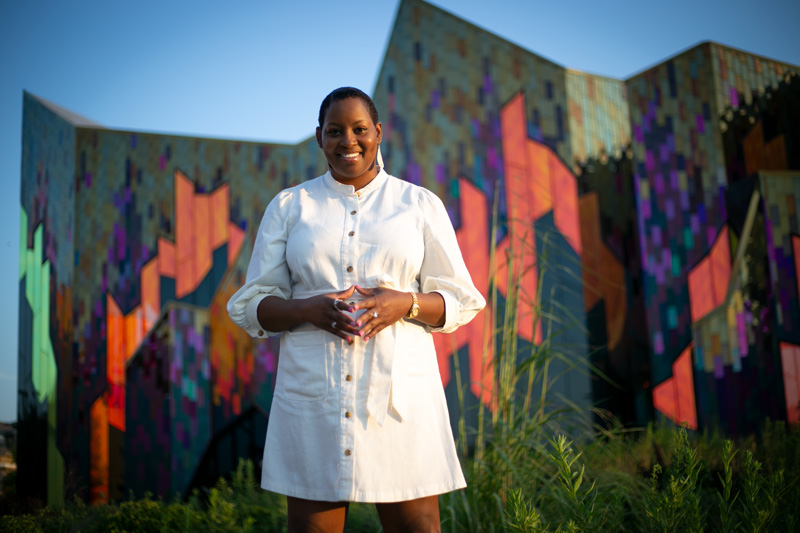 A certified public speaker and published author, Tanika Cherie’ believes in the power of sharing her story to inspire others. After the deaths of many close family members, including a child and her husband, she battled with trauma and grief. Since moving her family to Overland Park, she says she has found new beginnings, a supportive community and inner peace.

She co-authored “The Power of Connections,” a networking class she taught last fall with her friend Ramanda Hicks at Enterprise University. Cherie’ and Hicks founded Be a Bridge & Elevate, an organization designed to support and empower women. Born in Nashville, Tennessee and raised in Indianapolis, Indiana, Cherie’ holds a bachelor’s degree in communication from Indiana Wesleyan University and FINRA certification for financial professionals.

She has worked in the financial and banking industries for 20 years and now works in case management for a local nonprofit. She has a son in high school and another son in the U.S. Marine Corps.

I’ve performed since the age of 7. From winning local talent shows, to modeling at Bronner Brother fashion shows, to winning the Indiana Black Expo.

Fast-forward, I go perform in Chicago, meet Tyler Perry’s people, I end up getting the lead in a play in Denver.

So we stepped out on faith. My husband, who was an executive chef, closed his restaurant, and my husband and I, with our two children, moved to Denver.

It was the best thing that had ever happened in our lives. My husband was a fisher. He loved it. I was doing commercials, a documentary. I had just finished a Nike commercial.

There’s a lot of women whose husbands pass. What’s different about me is both my parents passed 11 months apart of cancer. I buried a child, then I buried my father’s identical twin brother. I buried my brother, and then my husband.

So I shouldn’t even be here because everyone who I loved is gone, except my oldest sister. So when my sister passes, I have my children and extended family I don’t even know well. The big deal is, I could have taken my life. Had I not been a believer, had it not been my faith, I would have. That’s my truth.

We were active in ministry, so when God took him, I was done. Didn’t I go through enough? He was our covering. He made us feel safe. When he was gone, we weren’t safe anymore. I kept them safe, but I didn’t feel like I could. This superhero mom thing kicks in.

I grieved incrementally. After they (her children) went to school so they wouldn’t see it; during my lunch break because you better not lose it at work so they think you can’t do your job; on the way home I would lose it. And then I would get home and everything would be OK, and then they’d go to bed, I would be laying on the floor crying because I couldn’t get low enough, and I’m not over-exaggerating. I had to grieve in increments so that they wouldn’t completely feel there was no stability. I had to fake it.

When you’re grieving, when you’ve had trauma, when you’re sad, you’re just trying to survive. I was always a good mommy; what I’m saying is overall, it wasn’t easy. I did grief counseling in Denver, but it just takes time.

I was in a bad, bad place. They were so hurt, and I was too hurt to help them. The only place I knew to go was my church in Denver.

Then in faith, I moved here in July 2017. I left my children in Indiana for the summer, they go to their grandmother. So I moved here and set up home alone, by myself.

I didn’t know how to get around without the navigation system, so I would come down 135th, and I would find this place. I drove past here and cried when I saw this (the Museum at Prairiefire). It was the most beautiful thing I ever saw.

When I would feel alone or anything, I’d come here because that glass shines up, and I can’t explain to me what all it did for me.

In a time when I was broken, I rebuilt. As long as I’m giving and helping and giving love, it was healing for me. Taking the focus off of myself made me feel better.

This was a good move. My kids were happier once we came here. The schools were sensitive and understanding. We were embraced as a family.

Without my faith, family and community, I wouldn’t be here.