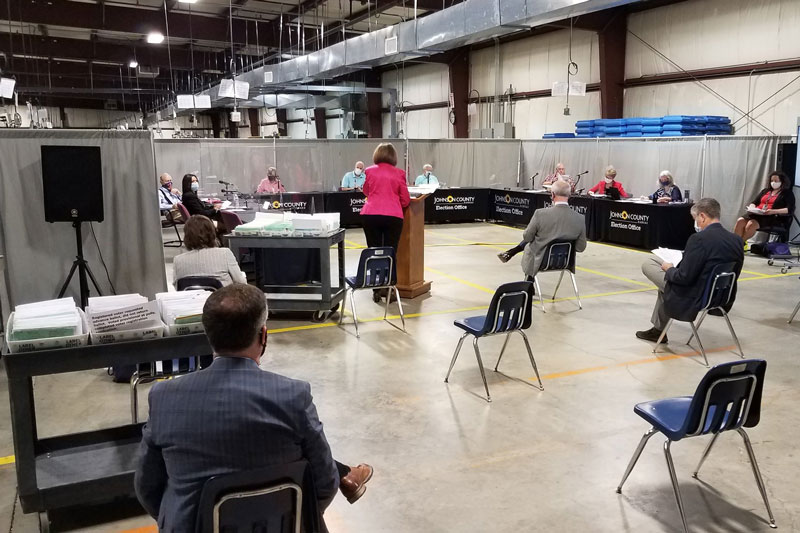 Election Commissioner Connie Schmidt said having an unusually large percentage of voters casting mail-in ballots during the pandemic did not appear to have stopped ballots from arriving on time in. Photo via Johnson County Election Office Twitter.

Voting by mail, by and large, did not prevent Johnson Countians from having their votes counted in this month’s primary election, according to a canvass of votes concluded Thursday. Just 673 of the almost 150,000 votes cast were not allowed because they arrived later than Aug. 7 or were postmarked after Election Day.

County Election Commissioner Connie Schmidt said having an unusually large percentage of voters casting mail-in ballots during the coronavirus pandemic did not appear to have stopped ballots from arriving on time in what was a record turnout primary.

Just eight votes shy of 150,000 were cast overall, which amounted to almost 35% turnout. In contrast, turnout for the August primary in 2016 was about 20%. Overall, mail-in ballots accounted for 56% of the total number of ballots cast. Election officials said there was a 79% return rate on mail-in ballots sent out.

The Aug. 4 primary could be a preview of a potentially historic general election in November.

Schmidt said Thursday that turnout could easily double in November and may even approach 80%. She noted that 100,000 mail-in ballot applications for the general election have already been received.

The vote canvass is a review by county commissioners of the final results and includes the decisions on which challenged ballots were or were not counted. Some 1,499 provisional ballots were not counted this year, and among those 673 were either postmarked or received too late.

This year, mailed ballots that were postmarked by election day could be counted as long as they arrived in the election office by the Friday after election day. Schmidt did not have a breakout of how many ballots were correctly postmarked but arrived later than Friday.

The number not counted was not enough to change any of the results, Schmidt said.

Other problems that resulted in a ballot not being counted included:

Some 2,533 provisional ballots were counted after being researched by the office. Those included 1,475 where the voter asked for an advance ballot but did not return it, then voted provisional at the polls. Another 425 had moved or changed names and 289 did not submit voter identification at the polls but provided it before the canvass.

Some ballots were partially counted. Those were mostly when people showed up at the wrong polling place or had the wrong party affiliation. In those cases, write-in votes and votes for certain offices could still be counted.

Schmidt said the election generally went smoothly, and that she’ll continue to encourage mail-in voters to drop off their ballots at the drop boxes at the election office in Olathe or at a polling place during that last week before the election.

She would like to get another drop box in the northern part of the county as well, she said.

Talk of increasing postage should not affect the county either, she said, because Johnson County sends its mail first class and not on a cheaper advertising or bulk rate. There has been talk nationally of increasing the rate for ballots to 50 cents, where the norm for marketing rates had been 20 cents.

“The post office will need to come through for the November presidential [election] nationwide, and we will continue to tell voters not to put their ballot in the mail the last week and drop their ballot off. That’s the safest way to know that we got your ballot,” she said.

The biggest needs for the next election will be for more poll workers. Schmidt had been working on getting younger people to the polls to reduce the dangers of COVID-19 infection to mostly older poll workers. But the polls were still predominantly staffed by older workers for the primary.

With discussions in the news about more transmission and schools reopening, Schmidt said, “Parents are being very protective of their teenage kids.”

Some polling places had only four workers, which is “bare bones,” she said. “It’s unfortunate but we did the very best to get as many people in the polling places and trained as we could. I am eternally grateful for all of them.”

For the general election, Schmidt said she would like to increase by 20 the 167 polling places and add two more to the seven advance voting places.