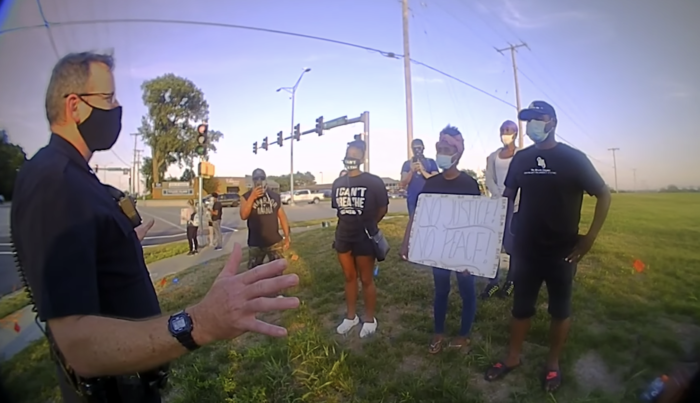 Police and protesters talk early on the night of demonstrations in Overland Park in late July. Screen shot of body camera footage from Overland Park Police.

Residents in an Overland Park neighborhood that was the scene of protests last month are still shaken, saying they have been harassed and bullied since the incident near Johnson County Community College.

Six people showed up to the city council’s public safety committee meeting Wednesday night in support of the police. Some said they were traumatized by the events of the July 24 protest that ended in four arrests in the neighborhood around 116th Street and Quivira Road.

“I’ve lived in fear now for a month,” said Amy Camp. She reported protesters in her driveway that night. “I’m scared at night. I can’t sleep. I’m worried for my children.”

The protest that day, organized by community outreach group Miller Dream LLC, was one of many that have taken place around the Kansas City area and in cities across the U.S. in the months following the police killing in May of George Floyd, a Black man in Minneapolis who died with an officer’s knee on his neck.

The Overland Park protest saw about 30-40 mostly young people turn out on a Friday night in late July near JCCC. The demonstration peacefully marched down College Boulevard and then wound into a residential neighborhood. There, it stalled when protesters and some residents exchanged words, with some homeowners asking protesters to get off their properties and leave the neighborhood.

Around that time, four protesters were arrested, including an attorney. The Overland Park Police Department said an officer suffered a scraped knee during an altercation with a protester.

Since the protest, residents said they have been harassed for asking the protesters to move along or quiet down, said Dan Herner, a neighbor who said he was speaking for several others who were too afraid to talk at the open meeting. The harassment has ranged from residents being followed, to cars racing and honking down the streets, to a mysterious pickup truck that keeps returning to the area, said some people who spoke at Wednesday’s meeting.

Another man said he’d been “doxxed” — meaning some of his private personal information had been published online without his consent.

“What this is is political harassment,” Herner said. “When someone stands outside your house with a bullhorn and says essentially, ‘Defund the police, vote how I want or there will be no peace in your neighborhood,’ that isn’t protest, it’s political intimidation.”

Camp said protesters were in her driveway, and she asked them to move so her toddlers could sleep.

“Then I was told if there was no justice, my kids could have no sleep,” she said. “I want my kids to have peace in their life and live in a residential area that does not have this coming into our suburban area.”

The neighbors said they were grateful police officers were allowed to “do their jobs” the night of the protest. Two speakers said having the police to control the protest was preferable to leaving it to neighbors to defend their own properties.

“We’re not Portland,” Herner said, referring to Portland, Oregon, where there have been frequent and often violent clashes between law enforcement and demonstrators in recent weeks. “If the police are not allowed to do it, we’re left to defend ourselves, and that’s not safe for us or the protesters.”

‘White privilege at its finest’

Stacy Shaw, a Kansas City, Missouri, attorney and one of the protesters that night, said residents’ contention that they are being intimidated and targeted by demonstrators is “absolutely a lie.”

“None of that is happening,” she said. “We are busy people with full-time jobs. We’re students or volunteers in other walks of life. We don’t have time to do what they say is being done,” she said.

Meanwhile, a statement from The Miller Dream LLC, the protest’s organizers, said residents’ complaints at the committee meeting Wednesday were “white privilege at its finest.”

“There is a great divide in who you choose to protect and serve,” the statement said. “Overland Park, the injustices must stop. We have to stop turning a blind eye to the problem that exists in America not only today but has existed for many years: systemic racism.”

Shaw was one of three people arrested and charged with blocking a public street on July 24. A fourth man was charged with battery of a law enforcement officer, but Shaw said that man ran into an officer as he was trying to get to his wife, who was being taken into custody.

Shaw also said the demonstrators, mostly young people, were acting peacefully and that some of the residents instigated the tension.

She said, at one point, a couple came out of a house screaming at the demonstrators.

“And these were middle-aged white people, yelling profanities, being immature and blatantly vitriolic towards people who could have been their kids’ age,” Shaw said. “Yelling stuff like, ‘Get off my property!'”

The conflict that night and the concerns being raised now by residents, she said, are signs of “entrenched white supremacy” in Johnson County.

“They are so offended by a group of young people — most of whom, by the way, were white, with just a few black and brown people — coming into their community that they call out the riot police and then go lie at a city council meeting” she said.

Henry E. Lyons, president of the Olathe and Overland Park chapter of the NAACP also spoke, saying his organization has not found evidence of systemic racism in the Overland Park Police Department.

The NAACP supports removal of racial barriers through the democratic process, Lyons said.

“Going on somebody else’s property, going on a residential street, creating havoc and disturbing people — that’s not the democratic process,” he said.

He said his group would still pursue complaints of police bias. “If the police are wrong we have no problem saying they’re wrong,” he said.

Later, the committee voted to apply for a U.S. Department of Justice grant that would give the city $35,000, a little more than half of which will go toward de-escalation training for the police. The city would receive the money in the first quarter of 2021 and would allow for 10 officers to learn how to train others, plus another 90-100 officers to get the standard de-escalation training.

“This [training] is above and beyond what they get at the academy,” said Police Chief Frank Donchez.

The remainder of the grant would be used to purchase five new dash-mounted radar units.

Editor’s Note: This story has been updated with comments from Stacy Shaw and the protest’s organizers, The Miller Dream, LLC.