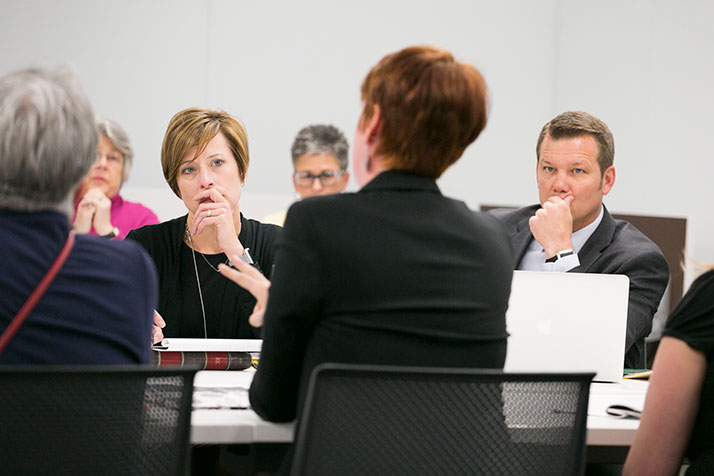 Shawnee Mission Associate Superintendent for Human Resources Doug Sumner (right) will resign, effective Dec. 31. The district announced he will be on leave between now and then. Photo credit SM Post.

In a letter emailed to district administrators, Superintendent Mike Fulton said Associate Superintendent for Human Resources Dr. Doug Sumner was stepping down, effective Dec. 31. Fulton’s statement said Sumner would be on leave from now until then.

“I know that this was a difficult decision for Dr. Sumner,” Fulton wrote, “but something he decided was in the best interest of both him and his family.”

Fulton went on to say in the letter that Dr. Michael Schumacher, currently the district’s Director of Secondary Human Resources, will take on the role of interim Associate Superintendent for Human Resources in Sumner’s place.

Schumacher’s move, along with a list of other personnel moves and other items, was approved unanimously Monday night by the Board of Education.

“I have the utmost confidence in Dr. Schumacher and the entire HR team,” Fulton wrote in his letter to staff. “Dr. Schumacher will follow up and provide guidance on where to direct human resources questions and concerns.”

Sumner has been with Shawnee Mission since 2015 and has had a long career in local public schools administration. Before arriving at Shawnee Mission, he served as superintendent of USD 232 from 2010 to 2015. Prior to that, he worked in the Gardner-Edgerton district from 2004 to 2010 as both the district’s director of human resources and the assistant superintendent.

He also served as an administrator at DeSoto High School from 1995 to 1998 and at Monticello Trails Middle School in USD 232 from 1998 to 2004, according to The Mill Valley News, the student publication at Mill Valley High School.

“I want to express my deep appreciation to Dr. Sumner for his service, and I hope that you will take the opportunity to wish him well in his future endeavors,” Shawnee Mission Superintendent Fulton said in his letter to staff Monday.

Schumacher has been a Shawnee Mission administrator for five years, according to his LinkedIn profile. Before that, he served as the principal at Piper High School in Kansas City, Kansas, from 2013 to 2015 and was a district administrator in Blue Valley Schools from 2011 to 2013.

He began his education career in 1998 as a science teacher at Bishop Miege High School in Roeland Park, later becoming an assistant principal there, serving from 2006 to 2010.