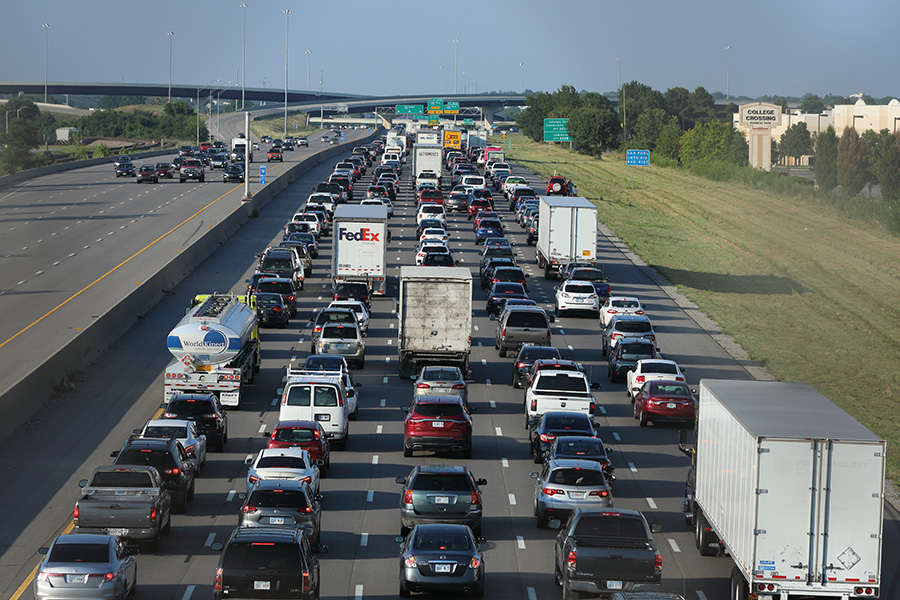 Traffic was backed up from the site of the crash under I-435 to nearly 127th Street in Olathe. Photo credit Mike Frizzell.

A four-vehicle crash early Saturday evening left four people injured and forced the closure of all lanes of northbound Interstate 35.

The Kansas Highway Patrol says the crash occurred about 5:40 p.m. on northbound Interstate 35 under Interstate 435 in Lenexa.

Troopers say a 2017 Kia Sportage was stopped in a northbound lane with a flat tire when a 2012 Chevrolet Impala rear-ended it. The Impala was hit by a 2008 Ford Focus, and a 2011 Mini Cooper then ran over the bumper of the Focus.

The crash blocked all lanes of northbound I-35, forcing Lenexa Police and Kansas Highway Patrol Troopers to divert traffic onto eastbound I-435.

The Highway Patrol’s crash log says everyone involved in the crash was wearing a seat belt.

Traffic was backed up to nearly 127th Street, in Olathe, according to Kansas City Scout traffic cameras. All lanes of Interstate 35 reopened about 7:30 p.m.