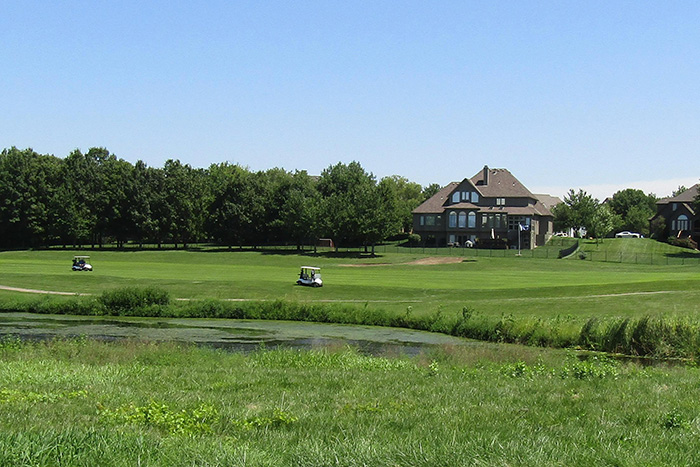 There was disappointment all around earlier this week as a decision was once again delayed on how to resolve a six-year impasse between Overland Park and neighbors abutting the Westlinks golf course who want a new fence. This time the issue was the wording of a neighborhood association opinion poll.

A deteriorating iron fence originally installed in 1991 on the city-owned course has pitted the Nottingham by the Green neighborhood against the city since 2013. Neighbors of the course near 125th Street and Quivira Road say the city has not maintained the fence around its course and now it needs to be replaced.

City councilmembers on the Community Development Committee acknowledge that the fence is in bad shape but have balked at the cost of replacing it with powder-coated steel that would be the modern equivalent of the original wrought iron. Instead, they have considered a vinyl-coated chain link fence, or none at all.

For years, the neighbors insisted on the steel fence — which would cost an estimated $365,000 — because they’ve been assured that the fence would always be there. The neighborhood’s developer paid for the more expensive fence, which was erected on the golf course land that was eventually leased by the developer to the city.

Overland Park officials have said a fence is not needed, but they would consider a chain link fence at a cost of about $165,000.

Committee members and neighbors thought they had a compromise last November, when Chairman Curt Skoog proposed that the city build the more expensive option but move it onto homeowners’ property. The homeowners would then be responsible for the ongoing maintenance.

Neighborhood leaders took that idea to the 83 homeowners whose yards backed up to the course. It was rejected 79-2.

Homeowners said repositioning the fence on their lots would incur additional expenses to connect with side fences and would cause them to tear out landscaping and sprinklers, said neighborhood spokesperson Eleanor “Snookie” Krumbiegel.

Another neighborhood spokesperson, Randy Coleman, called the idea of chain link “unfathomable.” He and Krumbiegel said they were surprised to hear that the other option would be to leave the golf course fenceless. In the past, the city has been adamant that it needs a fence to keep non-golfers off the course, and neighbors worried about the danger to children from the unfenced water hazards, he said.

The neighbors polled were only asked about where and what type of fence should be installed. The poll did not include the other option as being no fence at all.

“I’m surprised that people are surprised that we’re talking about removing the fence because that’s been the whole purpose of this discussion,” Skoog said. “We’ve been talking to the neighborhood for multiple years about the fence.”

But members of the city council’s Community Development Committee were mixed on whether all city taxpayers should bear the cost of the more expensive fence in an upscale neighborhood, given other budget stressors.

“I look at this from an equity perspective,” said Councilmember Chris Newlin. “How’s it going to look on us when we’re favoring 80 homeowners to 199,000 other people? I think people are going to be upset by that. It makes me worry from a public relations standpoint that we’re putting a more high-end neighborhood ahead of others.”

However Councilmembers Stacie Gram and Faris Farassati favored replacing the fence as the neighborhood wants. Gram said people who bought homes in the area made decisions about landscaping and pools relying on the idea that the fence would remain. Although it’s a bad time to replace it, the city should do it once, with the understanding that it would be the last time, she said.

Farassati said, “We need to keep our promises everywhere, for all of them, whenever we make a promise,” he said.

Skoog countered that the city makes improvements on parks and other property abutting neighborhoods. He said putting in the expensive fence may set a precedent the city can’t sustain when those neighbors start asking for an exact replacement of their fencing.

Ultimately, the committee decided to delay the decision for two more months so the neighbors could do another poll to clarify whether the compromise would be acceptable if the other alternative is no fence at all.