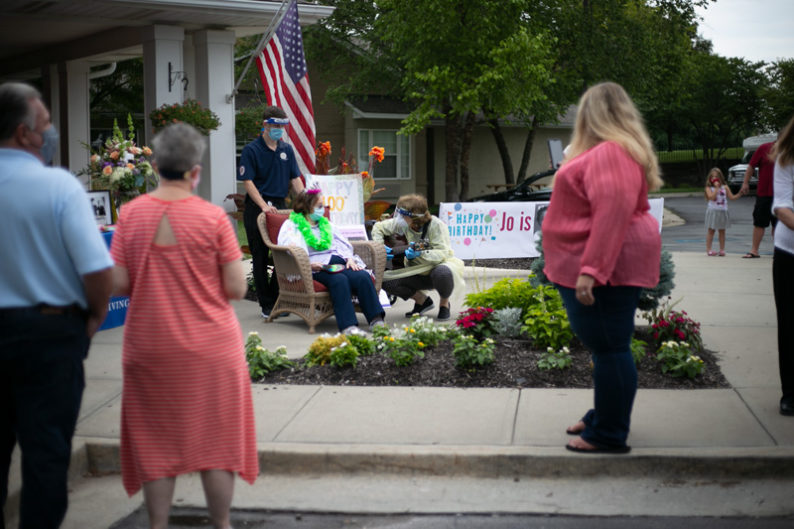 Everyone gathered — masked up, social distancing style — outside of senior living facility Brookdale Shawnee for the momentous occasion Thursday morning.

“She thought she’d never make it to 100 years old,” said Frank Nedrow, one of her two living sons who joined in the festivities. “She always said that that would be really something if she did, really special. In fact, her famous statement was, ‘Once you’re 100, that’s it. You can’t go beyond that.’ We always thought that was pretty funny.”

A bouquet of peach-colored flowers adorned the table honoring Nedrow’s life and service to her country and community. News crews with KMBC and KCTV came out to cover her birthday party, too. A banner draped across the sidewalk depicted Nedrow in her nurse’s uniform during World War II, in which she served and cared for military veterans recovering from combat as well as a few German prisoners of war.

“Her favorite love, besides her family, was being a nurse and taking care of people,” said Frank Nedrow, citing his mother’s nursing career, including a few years at Saint Luke’s on the Plaza.

The rain on Thursday stayed away just long enough for some pictures, storytelling and smiles, and some familiar and nostalgic tunes from a guitarist at Brookdale.

“We try to make the best of every day, during COVID especially, for our residents, and we’re just so excited that Jo is turning 100 and giving us all a reason to look forward to today and celebrate and have something fun to do, especially for such a sweet woman who’s lived with us for a couple of years,” said Allison Barth, sales manager of Brookdale Shawnee. “We really enjoy having her and are thankful that the family lets us be part of her life.”

Born Aug. 6, 1920 to Joe and Mabel Brock, in Troy, Kansas, Jo grew up with three brothers, Francis, Raymond and Phillip, and lived on a farm for a while before moving to St. Joseph, Missouri. Jo attended St. James Grammar School in the 1930s, and she graduated from The Convent of the Sacred Heart High School in 1938.

Following in the footsteps of her mother, who is believed to be the first licensed practical nurse in Missouri, Jo pursued her own career in nursing. She graduated in September 1941 with a degree in nursing at St. Joseph Hospital School of Nursing.

Her first job was at the hospital in Atchison, Kansas, where she worked with her best friend from college, a woman named Rosella.

She later joined the U.S. Army, serving as a staff nurse at Camp Crowder, Missouri and also a head nurse at Camp Shelby, Mississippi. She treated injured veterans and German prisoners of war. She was discharged in October, 1945.

After the war, she returned to St. Joseph and married Leroy Nedrow in 1943. They settled in Shawnee and had three sons, Frank, Mike and Mark. The couple shared 66 years of marriage before Leroy died in 2009. Her son Mark died in 1996.

In her free time, Jo also enjoyed playing bridge with her girlfriends, often three or four times a week.

“Mom also loved her champagne,” said Mike Nedrow. “It was always cute to go over to the house, open the fridge and there was always a bottle of champagne in there.”

She also tended to dozens of flowers, particularly roses, in her tea rose garden at home.

“We had a happy childhood, growing up. She’s been a great mom and loves her family. We really appreciate her still being here,” Mike said.