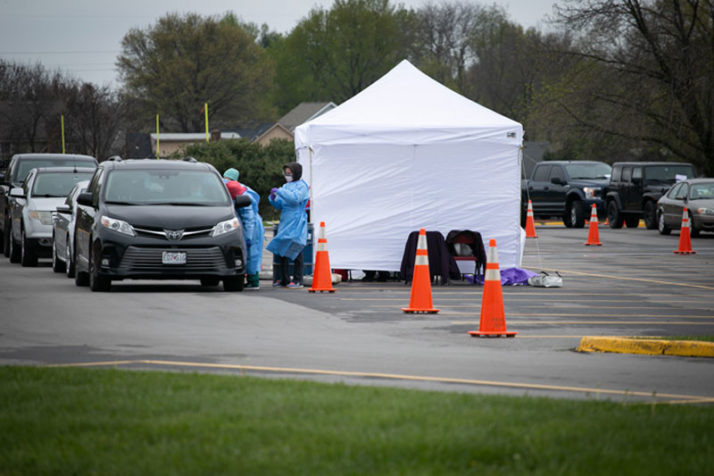 For some time now, people without symptoms have been able to get tested for COVID-19 in the area, but the Johnson County Department of Health and Environment isn’t sure exactly what percent of the total positive cases occurred in asymptomatic persons. Pictured above, county health workers administer COVID-19 tests.

In Johnson County, 5,439 people had tested positive for COVID-19 as of Thursday morning, and more than 2,800 people who have tested positive are presumed recovered. The percent of positivity based on the seven-day moving average is about 10% — a steady continuance from the last month or so.

It’s also clearly documented that the most common symptoms experienced by Johnson County residents who test positive for COVID-19 are coughing and fatigue.

For some time now, people without symptoms have been able to get tested for COVID-19, but the Johnson County Department of Health and Environment says it isn’t sure exactly what percent of the county’s total positive cases have occurred in asymptomatic persons.

JCDHE spokesperson Barbara Mitchell said health officials hope to be able to quantify that metric in the near future, but for now it remains “unknown.”

Since testing expanded in April to include people without clear COVID-19 symptoms, about 11,000 people have been tested at health department swabbing sites, Mitchell said.

According to statistics kept by the Kansas Department of Health and Environment, at least 8.5% of all positive tests statewide are from asymptomatic people. But that could just be the tip of the iceberg.

The total number of asymptomatic people who have had the virus isn’t quantifiable because, according to a report from the World Health Organization, testing capacity wasn’t high enough until later in the outbreak to open the door to asymptomatic testing.

How infectious are asymptomatic people?

Recent data from the World Health Organization and the Centers for Disease Control and Prevention suggest the degree of transmissibility for asymptomatic persons is unclear, but might be lower than someone who has symptoms.

Transmission from an asymptomatic person is still possible, though. With that in mind, Kristi Zears, director of communications for KDHE, said protocols interacting with people who are asymptomatic are the same as they would be for a person who is symptomatic.

Asymptomatic people are still expected to self-isolate from others and communicate with health care officials until they are considered recovered.

For information about testing whether or not you have symptoms, speak with your primary care provider or visit the Johnson County government website for appointments. Test results can take as long as a week or longer depending on the current demand for results in the region.