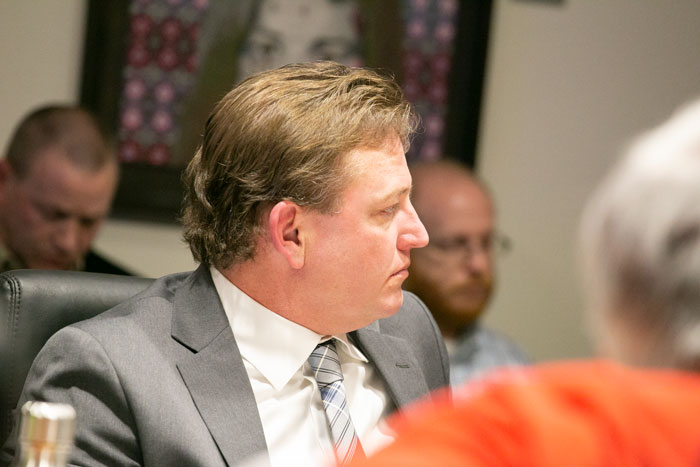 Hamblin faces one charge of domestic battery, a Class B misdemeanor, for an incident at his home July 21. He has a Sept. 16 court date.

“After he was arrested by Overland Park Police, and as he’s going through the court system, I felt it was best he not be sitting on the Public Safety Committee and making policy decisions about those issues at this time,” Gerlach said.

Hamblin, 42, was arrested at his home in the 17700 block of Garnett just before 9:30 p.m. on July 21. According to a published report, police reported damage to drywall but no injuries.

At the city council’s meeting Monday, in which Hamblin attended, six of his fellow councilmembers called for him to step down.

“He has put a stain on the city of Overland Park,” Councilmember Newlin said. “We are no longer the greatest place to raise a family as long as someone charged with domestic battery sits on this dais.”

Hamblin spoke only briefly at the meeting and said he didn’t plan to step down.

“Just let me be clear,” he said. “I will not be resigning my position and I will continue to serve my constituents and have no further comment at this time.”

Gerlach said it was unlike any situation he had been presented with in a long career in city government.

“I’ve been on the council for 25 years, 15 of them as mayor. We’ve never had any councilmember arrested like this,” Gerlach said. “We’ve always been a highly respected governing body, and we have to make sure we keep that respect among our citizens.”

Gerlach said, as mayor, he had no authority to sanction Hamblin further and that the councilmember could still attend meetings and represent his ward.

At Monday’s meeting, Councilmember Faris Farassati read a letter from Hamblin’s wife, Curstin, that supported him staying on the council.

“My husband is a dedicated servant to the people of Overland Park, and he has my full support to continue with his elected official duties,” the letter said. Calls for Hamblin to resign were “harassment,” and politically motivated, it said.