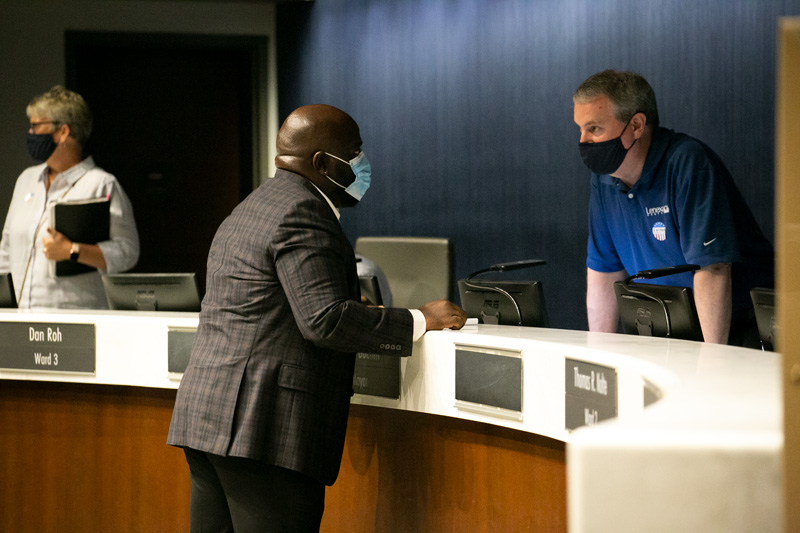 After the Lenexa Governing Body voted 5-3 to adopt a racial equity and diversity statement for the city, Mayor Mike Boehm and Pastor Eric Cobbins of a local Lenexa church shared conversations about the statement. Cobbins and other church members said they support the police department but think it should be kept separate from the diversity statement adopted by the city council.

Editor’s Note: This story was updated at 9:12 a.m. Friday to include a follow-up statement from Pastor Eric Cobbins providing additional comments on the diversity statement.

The Lenexa Governing Body on Tuesday adopted a joint statement rejecting racism, though city leaders were divided on a single paragraph included in the statement that praised the city’s police department.

Spurred by the nationwide protests sparked by the death of George Floyd, who was killed in Minneapolis police custody in May, northern Johnson County cities like Lenexa have been putting out statements declaring their commitment to diversity, equity and inclusion.

Though all members of the Lenexa Governing Body supported the statement’s core message, some councilmembers expressed disappointment that it also seemed to deflect attention from what they said should have been the target audience — people of color — and, instead, took time to also buoy Lenexa Police.

“The whole intent of this is to make sure that we are being sensitive to the people of color in our community,” said Councilmember Courtney Eiterich, who advocated for further revisions that kept the focus on diversity and holding officers accountable for unbiased policing, instead of offering “a pat on the back” to police.

“I’m not trying to discredit the things that our police department does; we have an awesome police department,” Eiterich added. “I also think it’s very, very important that we don’t have any misperceptions in the way that it’s written, that seems OK to us as the authors, but really are missing the mark when it comes to the audience that we’re trying to write it for.”

City leaders contemplated bringing it back for further discussion at a later date to allow time for city staff to make further revisions. Eiterich suggested making revisions that would have toned down or eliminated the paragraph about Lenexa police officers.

Other councilmembers countered with comments about valuing the police department, acknowledging the stress on law enforcement across the nation during months-long protests against police brutality.

“Understandably, there have been bad actions, and there are bad actions by officers across the nation, unfortunately. But, I think Lenexa, as we’ve shown, we train properly, we hire the right kind of people, and I want to make sure our police know that we support them,” said Councilmember Joe Karlin. “We have high expectations, and we expect them to uphold diversity and inclusion, but I also want them to know that we do stand beside them.”

Supporting both diversity and police

Mayor Mike Boehm and other councilmembers have said they wanted to adopt a general, broad statement about diversity — without direct reference to George Floyd or Black Lives Matter.

Yet the intent and timing of creating a diversity statement is inextricably tied with the nationwide movement on racial justice.

City leaders acknowledged as much, noting the value of an overarching statement that declares what Lenexa already values. The mayor suggested applying the paragraph on the Lenexa Police Department with all city departments, or removing the reference to police altogether.

“Because it’s bigger than Floyd, Black Lives Matter, police brutality, whatever concept you want to stick in here. In our effort to make sure we share that support, we’ve probably gone a little bit too far of overstating that.”

Police Chief Tom Hongslo said he understood the concerns of the council, but he stressed the value of any statement from the governing body declaring its support for the Lenexa Police Department.

“This is a systematic problem, racism is, but we’re the ones that are getting the brunt of all of this in the United States, and I don’t think that’s completely fair,” Hongslo said. “So I think that’s a very good statement to show your support for law enforcement and what we do in this community every day.”

In the past, city leaders have shown unanimous support for policies and measures related to diversity. City Manager Beccy Yocham, who crafted this latest statement and took suggestions from the city council on possible revisions, cited numerous examples of Lenexa’s past support for diversity and equity, such as:

Going beyond a statement

Some councilmembers suggested creating ongoing actionable items as a follow-up to the statement.

Councilmembers Julie Sayers and Karlin offered various suggestions, including community outreach, educational and training opportunities and creating a committee that tackles diversity issues within housing, policing and other issues.

City leaders deliberated for about half an hour before voting 5-3 to adopt the statement.

Councilmembers Corey Hunt, Mandy Stuke, Tom Nolte, Joe Karlin and Bill Nicks supported the statement as it was presented with the paragraph about police.

Councilmembers Eiterich, Sayers and Roh voted against it.

Afterward, members of the black community who are active at The Worship Center of Kansas City, located at 106th and Lackman in Lenexa, said they were disappointed in the vote. Pastor Eric Cobbins had a lengthy discussion with the mayor afterward.
“While we do commend the police department, I don’t think that this is the statement where that was appropriate to give, what I would also consider a big pat on the back or kudos,” said Ryonda Hall, chief financial officer of the church. “Now, what you did by shining a spotlight on them (the police department), you reverse the motive of the thing. It did not belong in the broad statement. To put that in there made it appear that you were really just trying to make sure you didn’t offend a particular group of people, but you didn’t care enough to revise it to make sure you didn’t offend another group of people.

“It takes the willingness to learn how others think, how they perceive. You can’t say in ‘paragraph one’ that you want to be inclusive, yet you won’t give one more meeting to be inclusive.”

Cobbins said he agrees with the statement supporting the Lenexa Police Department, but thinks it should stand alone and separate from the diversity statement. He provided the following statement in an email afterward:

“Our support is definitely for the police and we feel that they should be respected and honored for their services. But the statement released by the Lenexa City Council should keep the focus on the main thing… and that is, that Lenexa will be a city of diversity and equality for all people. The blurb about the police should be written and articulated but not in this statement.”

Below is a copy of the Joint Statement of the Governing Body of the City of Lenexa Regarding Equity and Diversity as adopted:

As the elected leaders who represent the citizens of the City of Lenexa, we are dedicated to serving all who live, work, visit and play in Lenexa. We reject racism and oppression and believe that everyone should be treated with dignity and respect. Discrimination in all its forms is wrong and inconsistent with the City’s values. We oppose discrimination toward any person on the basis of race, religion, color, sex, age, national origin, ancestry, sexual orientation, gender identity or disability.

A guiding principle of Vision 2040 — the community visioning process completed in 2018 — is that Lenexa continue to be inclusive and a city which “respects and values community members from diverse backgrounds, abilities, viewpoints and experiences.” We reaffirm our commitment to this vision for Lenexa and will work to ensure our community is a place where everyone is treated with respect, feels safe and is heard.

We strive to be inclusive in our city government, including in our hiring practices and communications and in the policies we adopt and the laws we pass. We have long advocated for and are committed to actions that promote equity and inclusion.

We are proud of the officers of the Lenexa Police Department who bravely work, often under difficult and stressful conditions, in service to our community. We have high confidence in their professionalism. We stand beside them and support them in their continuing effort to keep our community safe and to implement fair, transparent and unbiased policing in a way that reflects the community’s vision, guiding principles and values.

We commit to listening to, learning from and collaborating with all Lenexans. We will foster a culture of mutual respect and understanding which affords equal treatment to everyone and creates positive change in our community.