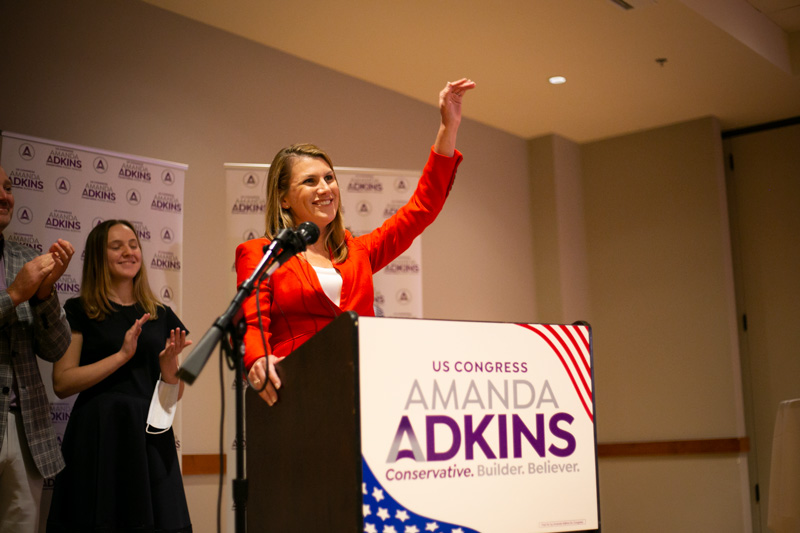 Surrounded by a cheering crowd of friends and supporters at Prairiefire on Tuesday evening, Adkins said she felt grateful for their support and honored to be the GOP contender for the seat.

“I never would have imagined, in the midst of it, that our great country would face a serious healthcare and economic crisis as we do right now,” Adkins said, citing the impact of the COVID-19 pandemic. “I’m even more grateful for the decision I made to run for U.S. Congress here in the Third Congressional District because of this difficult situation we’re in.”

Unofficial final results show Adkins comfortably ahead with 30% of votes.

Adkins called the primary election “a decisive victory” for her campaign team, which “focused on an ideas agenda” that addressed the economic turmoil brought on by the pandemic.

“A lot of voters know that I put forward a ‘path to prosperity’ plan that is really central to what I think is important for the future of the Third Congressional District and our country, so I’m really proud that the ideas we put forward, that they really resonated with voters here,” Adkins said. “I seek to go win in November.”

In a statement after the race was called, Weir said she wanted to congratulate Adkins on her victory.

“As I’ve said from the beginning of this race, the most important thing for the party is that we have a candidate that can defeat Sharice Davids in November,” she said. “I look forward to working to help make that happen.”

In remarks about her general election opponent, Adkins said Davids “has no vision” and that “she does not share the values and beliefs of the Third Congressional District.”

Adkins said she is challenging Davids to three debates, one in each of the counties of the Third Congressional District — Johnson, Wyandotte and Miami. Adkins asked that those debates take place at either businesses or healthcare institutions.

“Sharice Davids, I have one message for you tonight, and that is: We are coming for you this November,” Adkins said.

Davids released her own statement at the end of the night, citing her work for the past two years in office “to tackle the issues most important to Kansas families – fighting to lower the cost of health care and prescription drugs, invest in infrastructure to create jobs, and provide relief to our families, workers, and small businesses during the coronavirus pandemic.”

“I’m confident that Kansans will vote to continue the progress we’ve made together, and reject Sam Brownback adviser Amanda Adkins’ plan to double down on the failures of the Brownback Administration that gutted funding for our public schools and decimated our economy, the effects of which Kansas families are still feeling today,” Davids said.

“Our country is experiencing an unprecedented crisis, and we need a leader in Washington who will work to move us forward, not drag us back.”