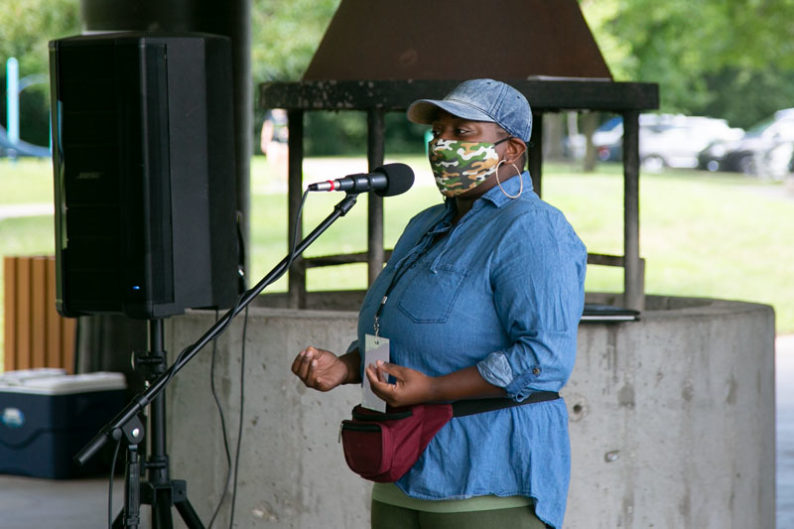 Linnaia McKenzie, a leader with the Advocacy and Awareness Group: Johnson County, speaks at a community conversation event at Indian Creek Recreation Center in Overland Park.

More than 25 people gathered at the Indian Creek Recreation Center shelter to discuss protests, de-escalation and potential policy changes. Linnaia McKenzie, co-founder of the Advocacy and Awareness group, said while it’s good to have different backgrounds and opinions, all those in attendance were there for a common goal.

Moyer recently visited Aurora, Colorado, where a black man by the name of Elijah McClain was killed by police while walking home in 2019.

Although Aurora “is a really nice place,” someone was killed there, Moyer said. The recent protester arrests made Moyer ask himself if things were to escalate in Overland Park, could someone be killed by the police department.

“That really hit me,” Moyer said. “I realized that what happened in Aurora, Colorado, could most definitely have happened in Overland Park. That’s because of certain tactics that police officers use that not only make people feel uncomfortable, but also do hurt them and do kill them.”

Marisa Richmond, one of the protesters who was arrested in Overland Park, spoke about her recollection of the events surrounding her arrest. Richmond illustrated a peaceful protest that quickly turned awry once police officers showed up in riot gear, and said there is much to be changed within the city’s police department.

Sheila Albers, the mother of 17-year-old John Albers who was fatally shot by Overland Park police officer Clayton Jenison in 2018, called on the community to pressure the city council for transparency. Additionally, Albers said the city council should work to expand its independent bias and policing board “to be something truly meaningful” that can “bring about change in sooner than two years.”

Lyons said the Overland Park police officers responded differently to the second protest after the city council received resident complaints following the first July protest. Councilmember Fred Spears said one resident told him she “didn’t know if those crazy people are going to come to my neighborhood,” and asked the crowd to consider having a conversation rather than shouting at people.

Haile Sims, a Roeland Park resident and a leader for Advocacy and Awareness Group: Johnson County, said he fundamentally disagreed with Spears’ statement that “we are not asking nicely enough.” Sims said, as a black man, he’s currently having the same discussions about racism and equality with his children that he had with his parents.

“I don’t want to do this again 20 years from now,” Sims said. “Let’s fix this issue so me and my children have the same access. Just give me the same access to police and the justice system, that’s all I ask.”