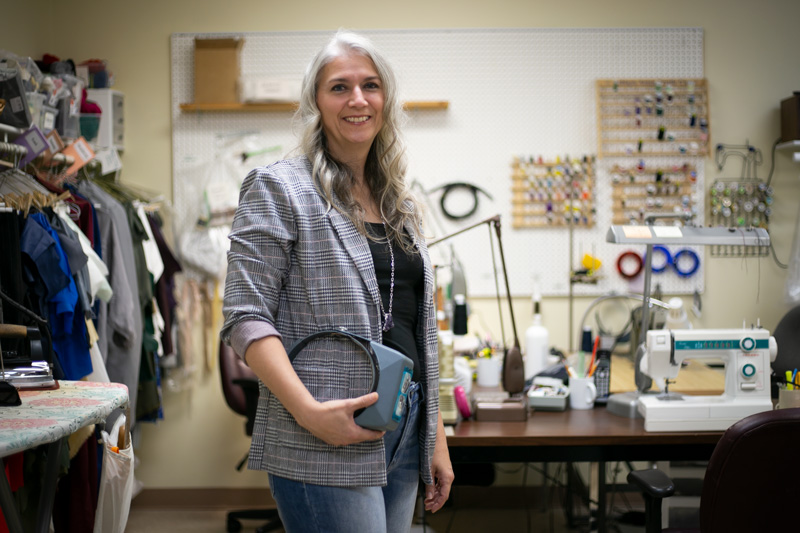 A self-taught seamstress, Tammy Kampschroeder knows the ins and outs of French weaving. It’s been a few months since she took over ownership of Amazing Garment Repair, where she’s worked since Judy Rehyle opened the shop 15 years ago. Rehyle taught her weaving skills before retiring and selling the shop to her in May. The Overland Park shop at 97th and Metcalf specializes in restoration of garments as well as mending, tailoring and alterations. Here’s a video of what her work looks like. Originally from Iowa, Kampschroeder earned her art history degree from the University of Kansas and previously taught art at Allen Village School in Westport. Outside of work, she enjoys time with the family, especially camping and playing games, as well as helping out neighbors. She lives in Overland Park with her husband, Paul Kampschroeder, and their two sons, Max and Lewis.

Everything seems to have a story. The items that sometimes are brought in, I just love to be able to renew the life of it and just bring it back to either what it was or take it a little bit of a different direction if we have to redo something, to recreate what was there.

And then it’s still wearable. I like to not waste.

I love to be able to create something and give something life that someone thought was maybe lost. It could just be their favorite pair of pants, their lucky tie, whatever that is, or something that is passed down through a family. And just to be able to restore, and just give back the ability to wear it.

Like I said earlier, things seem to have a story, and people hold onto things for whatever purpose. In our society, when we just throw away, I just feel like this is a way to just hold onto things and keep memories and all that kind of stuff alive.

For example, I just finished mending a damaged baby gown that’s around 96 years old. It’s a family piece that’s been passed down. And then a new family member that had a baby, they’re going to get the photos in it; the ancestor had the photo in the baby gown as well. The new baby is named after the relative that wore it.

French weaving is where I would find the thread within the garment, and I reweave it thread by thread to repair the small hole or damage.

I definitely wear magnifier glasses. It’s the patience of going through and using the needle that has the thread, and understanding what the weave is.

Because there’s different kinds of weaves as well. You just have to know where you’re starting, and then you begin the thread where it’s missing, and then once you put your “across” and your “up and downs” in, it will then finish the piece.

It definitely can be a tedious job, and there are ones that kind of take a curve a lot of times, where you think oh, this is just this part of the hole, and then it might do what we call is break-out, it gets bigger. So then sometimes, initially, if you think you’re going to do a French weave, it ends up needing what’s called an overweave, and that is a different style in which you harvest that same pattern within the garment, and you weave in the piece into where the damage or the larger hole is.

And there are a few different styles. There’s a basic one-and-one, in grade school, if you remember making table mats out of construction paper, that would be like an over one, under one type of a style.

Then there’s things called herringbones, and that is going to change the direction. It kind of has these breaks, so it looks like a stripe, goes back and forth. And then there’s a weave that’s called a hound’s tooth, and then there’s two-and-ones, all sorts of different weaves.

The art of French weaving and overweaving is, I would consider a lost art because, well, one there’s not very many of us that are actually doing it still. It’s a small community, and it’s something that, it just takes a big commitment to learn how to do it and to put forth the effort to practice and practice and continue to practice.

And then sometimes, it just takes a personality or a person type that understands and gets it and wants to put forth the effort. It really is something that has to be almost passed down. There has been literature, there has been things on how to, but you just work side by side with someone to help them, maybe show them a different way to go about doing something.

It’s definitely a hands-on technique. Of course, we have machines, but French weaving is all done by hand.

Every piece is its own individual, like there’s nothing that’s ever going to be the same as it was before. I mean, every piece has a personality, has its story.

And for me, when I work on them, I might think of the customer. For me, I just put it all together. For example, that baby gown, I just think hopefully this new generation, he will do well and be healthy and safe. I just really put my heart and soul, and my love, into each piece.