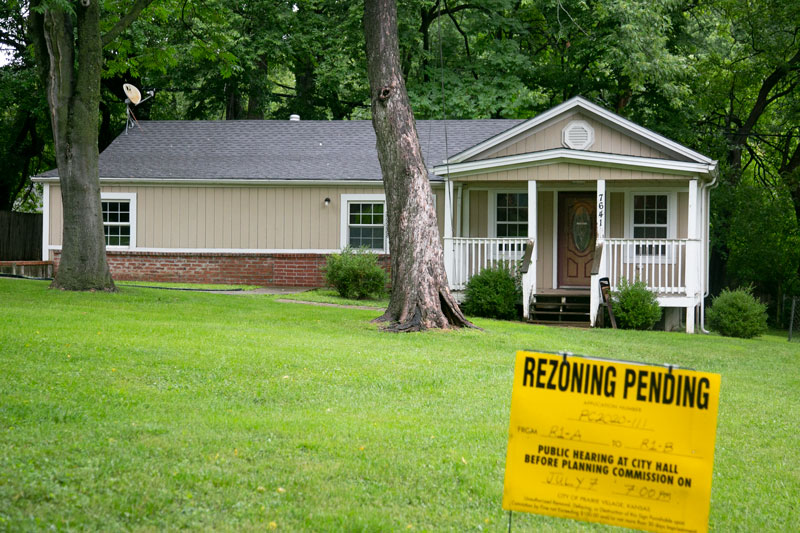 The rezoning requests on Reinhardt Street, including 7641 Reinhardt, would allow developers to split the lot into two smaller lots with different building guidelines.

The Prairie Village City Council on Monday will consider rezoning requests for 7632 and 7641 Reinhardt Street after denying a rezone request for 7631 Reinhardt at the July 20 city council meeting.

The pending requests intend to rezone both properties from R-1A single family residential to R-1B single family residential, which would allow the two lots to be split into four smaller lots. Although construction documents have yet to be submitted to the city, Deputy City Administrator Jamie Robichaud said what can be built on a R-1A lot is already bigger than what can be built on a R-1B lot.

“Hypothetically speaking, if what [developers] would build on [the pending lots] is new, it’s going to be larger than the existing home on the lot,” Robichaud said. “Though, you can’t build as large of a home on an R-1B lot as you could on an R-1A lot.”

Prairie Village residents Betty and Bob Clark have relayed their concerns via letters to the planning commission and the city council. In a letter Betty intends to submit for the Aug. 3 meeting, she summarized numerous concerns including the following:

“Aside from not blending in, [the teardown and rebuilds] will increase the property taxes for these longtime homeowners — some of whom are now or are close to retiring,” Betty said in the letter. “Those taxes have spiked high enough without adding more. It should not be a hardship to remain in your longtime home.”

No residents spoke at either of the two planning commission public hearings — neither in favor nor in opposition of the rezoning — with the sole resident input being the first letter the Clark’s sent for the July 7 public hearing.

Since the planning commission unanimously approved the rezoning requests and lot splits for 7632 and 7641 Reinhardt, both will be up for the city council to consider at its Aug. 3 meeting. Robichaud said written comments can be submitted to the city clerk at cityclerk@pvkansas.com until 3 p.m. on Monday. No verbal comments will be taken since a public hearing was already held at the planning commission’s July 7 meeting, she said.