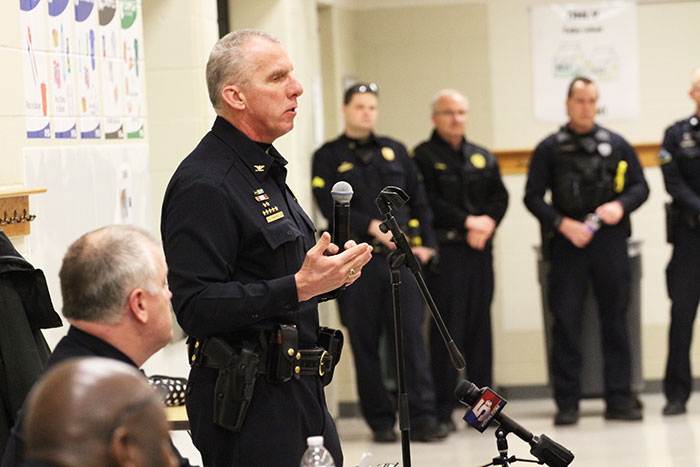 Police Chief Frank Donchez, seen in a file photo, said the updated policy on shooting at moving vehicles came about after discussions with members of the mental health task force, the city council and the community.

The Overland Park Police Department has updated its policy on use of deadly force regarding shooting into moving vehicles after months of conversation with members of the city council and the community.

Overland Park’s previous policy on firing at moving vehicles differed from that of neighboring Johnson County police departments, which labeled firing into vehicles a “last resort” or noted that “shots fired at or from a moving vehicle are rarely effective.”

Overland Park’s policy had drawn scrutiny following Officer Clayton Jenison’s fatal shooting of 17-year-old John Albers as he backed out of the family’s driveway in January 2018. Police had been called to check on Albers’s welfare after a friend saw him threatening suicide on FaceTime. Overland Park settled a wrongful death lawsuit brought by the family for $2.3 million in January 2019.

Sheila Albers, John’s mother and the founder of the group JoCo United, celebrated the development, calling it a “win for everyone in Overland Park.”

“JoCo United has been advocating for these best practices since John was killed in 2018,” Sheila wrote in an email. “The Overland Park City Council and the Mental Health Task Force absolutely made the correct decision by pushing to amend this policy to match best practice and undo the archaic policy from 2016.”

Officers will not discharge a firearm at or from a moving vehicle except in self defense or defense of another and when the suspect is using deadly force by a means other than the vehicle unless; a reasonable officer could infer the vehicle is operated in a manner deliberately intended to strike an officer or citizen and all other reasonable means of defense (including moving out of the path of the vehicle), have been exhausted, are not practical or are not present; and the safety of innocent persons would not be unduly jeopardized by the employee’s action.

Officers will not shoot at or from a moving vehicle unless someone inside the vehicle is using or threatening lethal force against an officer or another person by means other than the vehicle itself. The only exception to this policy is in the apparent act of terrorism when the vehicle is being used as a weapon of mass destruction.

Overland Park Councilmember Chris Newlin, who chairs the Mental Health Task Force that was created earlier this year, celebrated the policy change, saying that it was the result of months of discussion between city officials, the community and police leadership. Newlin said that while Donchez “wasn’t there initially,” hearing from multiple voices convinced the department that the change was warranted.

“Change can happen,” Newlin said. “It takes time. It takes discussion. It takes finding common ground…I know sometimes people want things to happen at super fast speeds, but I think this is how you get things right.”

Donchez said that he believed the policy changes was “in keeping with best practices,” and that it had come about through discussions with Newlin, Mental Health Task Force Vice Chair Tom Herzog and police officials from other communities.

Newlin also noted that he’s been excited to see movement on efforts to provide crisis intervention training to every officer on the Overland Park force.