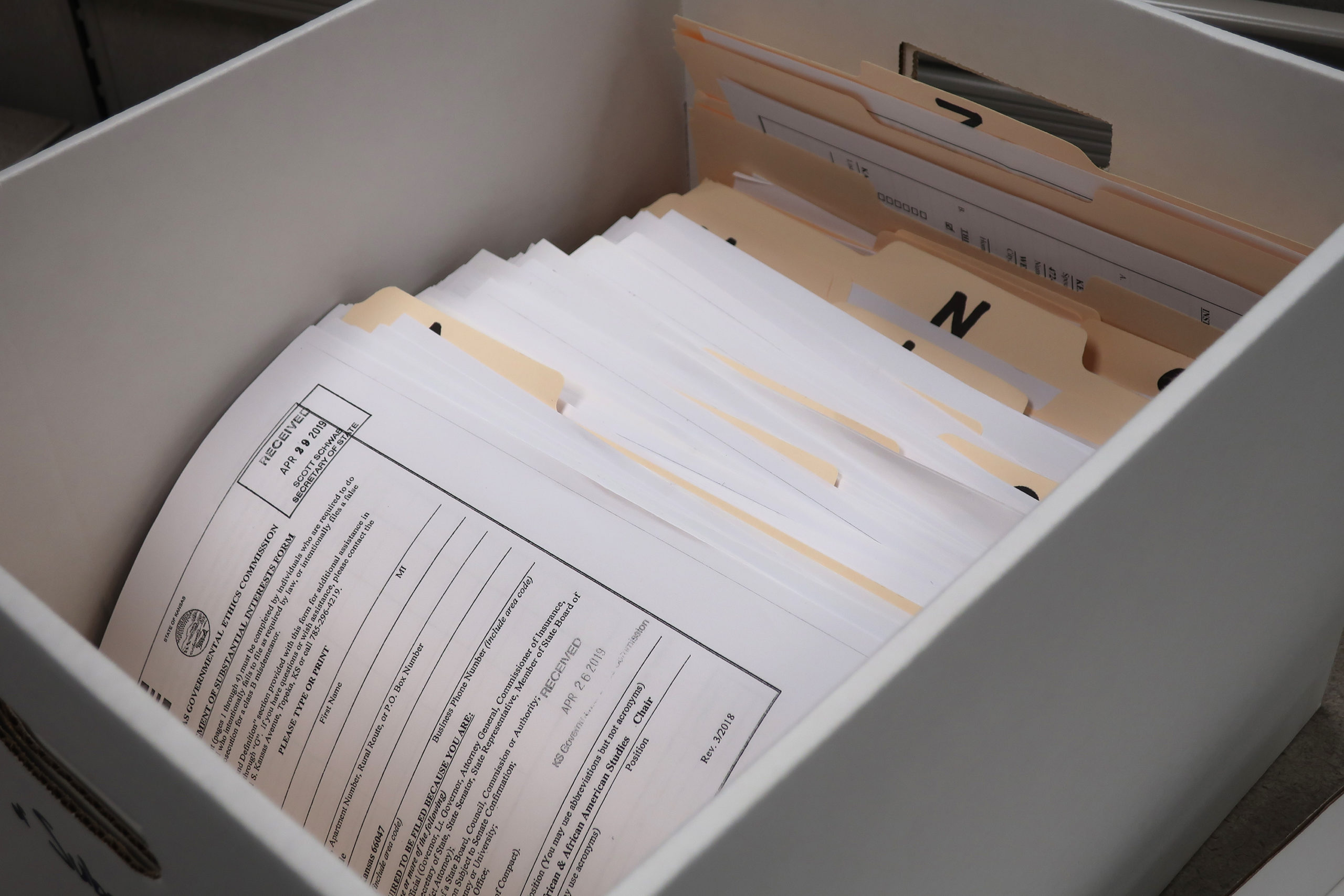 A box of 2019 Kansas statements of substantial interest sits on a desk in the Kansas secretary of state's office, Monday, July 20, 2020, in Topeka, Kan. The statements list the financial interests of state elected officials and hundreds of government employees, but because about a third of state legislators file them on paper, theirs are not available online. Photo credit Andy Tsubasa Field,/AP/Report for America.

TOPEKA, Kan. (AP) — People who want to learn about Kansas legislators’ financial interests have about a 32% chance of not finding the information online, according to a review of records by The Associated Press.

To see a report that’s not online, a resident must visit or call the secretary of state’s office in Topeka and request a copy at 50 cents a page.

Roughly a third of lawmakers file the disclosures on paper rather than online, and Secretary of State Scott Schwab’s office said outdated equipment prevents staff from uploading the forms to the computer system that can be quickly accessed by voters.

An office spokeswoman said they’re working on the issue, but an advocate for voters questioned the explanation that technology is to blame and said making the forms easy to access is important for meeting the spirit of the law.

State law requires lawmakers and hundreds of other public officials to file annual forms called statements of substantial interest — disclosure forms that list where the legislator and their spouse work, whether they are an officer or director of an organization or business, other business interests and stock ownership, and customers who pay fees and commissions. The secretary of state’s office has gathered the disclosures since the rule was enacted in 1974 as a post-Watergate reform. The forms allow voters to see whether lawmakers have financial interests that might affect their votes.

About a third of the disclosures aren’t online because the department has 1980s-era equipment, said office spokesperson Katie Koupal. She said a scanner doesn’t completely obscure information on some of the forms, such as Social Security numbers, that the office needs to redact before posting. Koupal said the department is “migrating off of” the system and plans to finish the project by 2021.

Schwab, a Republican, was not available for an interview to discuss why the office couldn’t buy a new scanner or take other steps to solve the issue more quickly, Koupal said.

The failure to redact private information has caused problems before. The secretary of state’s office started its online database of the forms in 2005, but early in 2018, Schwab’s predecessor, Republican Kris Kobach, took the database offline temporarily citing privacy concerns because partial Social Security numbers of some filers were visible. Kobach acted after the tech website Gizmodo called the failure to redact the information “beyond reckless” and “stupid.”

Beth Rotman, national director of the government watchdog group Common Cause’s ethics and money in politics project, said the forms should be disclosed in a way that average voters are able to see, and online data is quickly accessible and searchable.

“The public should have timely access to complete, searchable statements of their lawmakers’ financial disclosure statements so the public can evaluate any potential conflicts or red flags in real time,” Rotman said. “In many cases, delayed disclosure will equate to non-disclosure if the public lacks access to the information when they are evaluating whether their representatives appear to be acting in the best interest of their members — those every day Americans they represent — or their own pocket.”

The AP asked for the forms for 2020, which were due May 30 — a month later than usual because of the coronavirus pandemic. The AP found some forms online, some on hard copies at the secretary of state’s office, some on hard copy with the Kansas Governmental Ethics Commission and a few missing. The secretary of state’s office gathers the forms, but the ethics commission is charged with enforcing the rules.

Within a week of the AP asking the ethics commission for the missing forms, eight of nine were filed. One lawmaker, Republican Rep. Owen Donohoe of Shawnee, hadn’t filed as of Monday, July 20 morning for what he called personal reasons. He said the ethics commission told him someone was interested in seeing his form.

“I told them when I was available to do it, I’d do it. So they were like ‘OK’ because they know I’ve always done it,” Donohoe said.

Ethics commission executive director Mark Skoglund said his department takes a “prevention and education approach” to get the information, rather than fining those who don’t comply.

“The agency typically tries to avoid enforcement actions, tries to avoid, when we can, filing complaints, trying to assess fines, unless there is no other way to attain compliance,” Skoglund said.