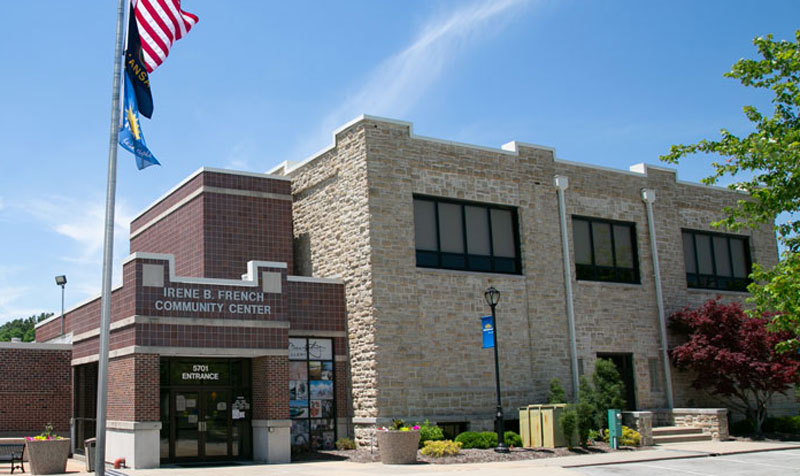 In a 7 to 1 vote, the Merriam City Council approved moving forward with the demolition of the Irene B. French Community Center, 5701 Merriam Drive. The city council unanimously approved the contract to Denton Excavating. File photo.

The Merriam City Council on Monday evening in a 7 to 1 vote affirmed the decision to move forward with the demolition of the Irene B. French Community Center at 5701 Merriam Drive.

Merriam voted in early June to take the demolition project to bid to evaluate the potential cost. The city received nine bids, the lowest from Denton Excavating for a little more than $100,000.
The bid includes the retention and cleaning of 40 cubic yards of exterior rock from the original building, as well as the removal of one of the stone mosaics on the west side of the building.

Councilmember David Neal said he believed there should be a separate vote to move forward with the demolition — which was not on the city council agenda — and the contract award agenda item.

“That’s probably something we should have a separate vote on,” Neal said. “It’s a large city asset that the county, at least, believes is worth more than $2 million. A decision on what to do should be independent of a decision on who should we decide to demolish the facility, which is what seems to be before us tonight.”

City Administrator Chris Engel said he saw the agenda item — the consideration of a $100,000 contract award to Merriam business Denton Excavating for demolition of IBFCC — as a blend of moving forward with the demolition and awarding a contract. Engel said he was of the opinion that if the city council were to approve the contract, that would be the green light to move forward on demolition.

Mayor Ken Sissom said it’s his belief that most people would assume the city would be demolishing IBFCC as the Merriam Community Center at 6040 Slater Street came into the picture. The public was informed that IBFCC was uninhabitable, and Sissom didn’t think anybody could sell to a constituent that the building is worth $4 million to restore.

“It’s not really a matter of whether you want to [vote to demolish] it for several reasons, historical reasons, preservation reasons,” Sissom said. “It’s the fact that it’s going to cost so much money for a building we don’t have a use for, we don’t have a need for.”

The city council heard a public comment from resident Billy Croan, a member of the former 5701 Building committee, who thanked the governing body for listening to the community. He said he supported whatever direction the city council chose to take.

Councilmember Bruce Kaldahl asked his fellow councilmembers if anyone had received constituent feedback about the desire to not demolish IBFCC. Councilmembers Bob Pape and Jason Silvers said they both received one comment about preserving portions of the building, and Councilmember Whitney Yadrich said she heard similar sentiments during her campaign last summer. The city council then approved a motion to move forward with the demolition of IBFCC, which Neal opposed.

Prior to the contract award vote, Kaldahl suggested the city council take a two week pause to give the public and any potential grassroots efforts to speak up since the bid is good for 90 days. Yadrich said while she appreciates the desire to offer the public ample opportunities to weigh in, it would be more difficult to get the ball rolling on the project if the city waited.

“I think there’s a flavor of hypocrisy in taking this vote, passing the acceptance of the bid and including a grant for people in that area to make exterior improvements,” Yadrich said. “We would be waiting and pausing on this one thing that could potentially become an eyesore if we did not move forward with doing something with it.”

The city council unanimously approved the contract award for the demolition of IBFCC.