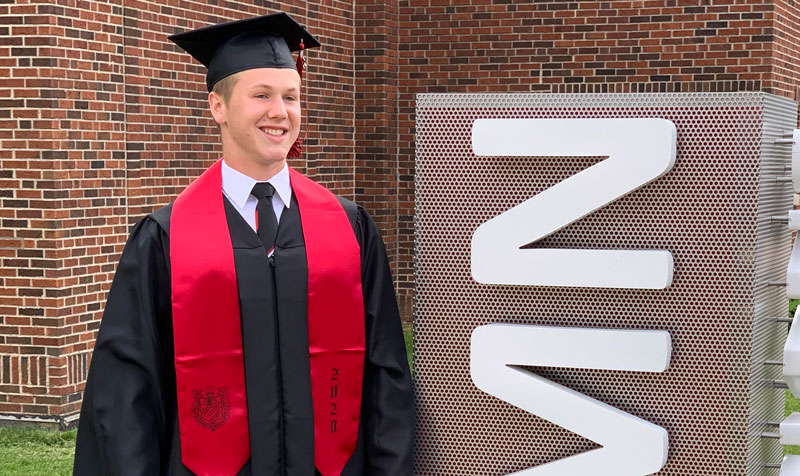 While some of his peers participated in a commencement ceremony, Shawnee Mission North 2020 graduate Harden Boldt took his oath for induction to the United States Naval Academy just four days earlier.

Boldt — who followed his older brother Harrison’s footsteps into the academy — said he has hopes to become a naval aviator, but his future plans don’t revolve around a career. He wants to lead a successful life, which he said he defines as being in a place where he’s remembered for the things he did to help others and the positive impact he leaves on everyone he encounters.

“My goal is to take a big step toward doing something meaningful while I’m [alive],” Boldt said. “I think the Naval Academy is a great start.”

The recent graduate spent his four years at SM North involved in a plethora of extracurriculars: cross country, swim and dive, track and field, student council, National Honor Society, Reserve Officers’ Training Corps and marching band to name a few. His senior year came with the stress of applying for the Naval Academy amid classwork along with ROTC, soccer and band obligations, he said.

When his senior year came to an abrupt end in March due to COVID-19, Boldt said he felt blessed more than anything else. SM North gave him “four really good years” with “great teachers and mentors,” he said.

Although Boldt said he doesn’t have anything to be sad about in regards to his shortened senior year, he was looking forward to getting closure with the people he’d been around for most of his life. More than anything, though, Boldt said he’s grateful for the SM North experience that he sees as an enriching advantage that often goes overlooked.

“I wouldn’t have gone to any other school, some people think there are better schools — I disagree,” Boldt said. “I think there’s something to be learned in any place you go. The community, at least at North, and the diversity and the world aspect of our school is something that’s going to help me in a way that I wouldn’t be able to know if I went somewhere else.”