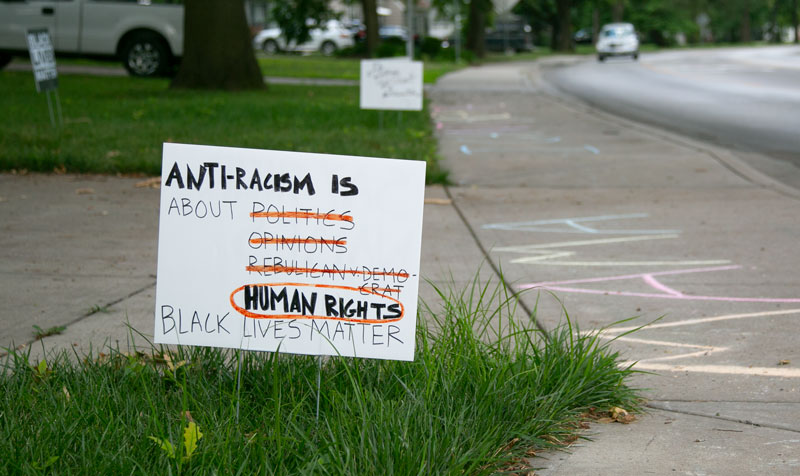 The Prairie Village family had anti-racist signs in their yard, such as the one above.

The Prairie Village Police Department issued a disorderly conduct citation to a man who allegedly yelled at a family while they were outside their home near Weltner Park, where a Black Lives Matter protest was taking place on July 18.

The incident sparked a change.org petition seeking justice for the family and protesters after officers initially declined to physically show up to the scene and issue the man a citation due to the “insufficient threat level,” according to the petition.

As a Prairie Village family unloaded groceries in their driveway, the man pulled up to their residence, which had yard signs with anti-racist messages on them, and “began belligerently screaming at the resident and children,” according to the Change.org petition. He continued to swear and yell at the family before moving onto “shouting obscenities” and verbally threatening protesters, according to the petition.

Police Chief Tim Schwartzkopf said there was an assumption that the incident was related to the protest, which the police department was trying to keep a low footprint at. The department planned to respond to vandalism, criminal property damage and overt acts of violence, he said.

“Based on the information we had there, we didn’t believe it rose to that level but we also didn’t realize that it was separated from the rally,” Schwartzkopf said. “So, had we made that connection, we would have sent a car down there.”

The disconnect put the department a day-and-a-half behind on the investigation, but once all the pieces were put together, “the end result was what it needed to be,” Schwartzkopf said. He said he spoke to the resident about the department’s response and none of the other items from the petition came up.

Martin Dressman, a 71-year-old resident who observed and briefly participated in the protest, was also yelled at by the same man. As Dressman mowed his lawn, which has a Black Lives Matter sign in it and is across the street from Weltner Park, the man approached and called Dressman “the enemy.” Dressman said the man told him he was responsible for the protest, as well.

A week prior to the incident, Dressman said he and his wife received an anonymous letter from neighbors implying their Black Lives Matter signs should be removed “to not draw unwanted attention.” The letter went on to say the signs and unwanted attention “might disturb the peace and quiet in the neighborhood,” he said.

While there are some people in his neighborhood who seem to support Black Lives Matter, as visibly noticeable from other yard signs, Dressman said it’s apparent others are having some difficulty with the signs of support.

“There are apparently some folks that are struggling with these new developments in our nation, in our neighborhood,” Dressman said. “I don’t know whether it was one person, or several people who got together and discussed it and decided that a letter needed to be written.”