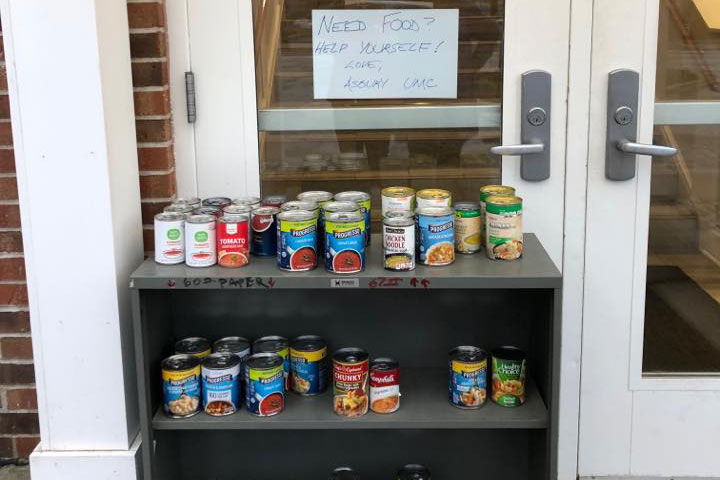 The Asbury Methodist Church in Prairie Village has a food pantry open 24/7, and those in need can simply take what they need when they need it. Photo submitted.

The Community Food Pantry has been serving about 50 people every week, and the need is expected to continue to grow. Volunteers are especially needed for Tuesday food pick-up from Roeland Park’s Aldi location, 4801 Roe Lane.

Sign up to volunteer here, or donate here. Donations specific to the food pantry should be selected as “Hunger Relief.” For additional questions, email info@roelandparkumc.org or call (913) 432-0235.

Two Overland Park police officers last week responded to a daycare center call and helped a toddler who was choking on a snack.

Officers Richie Vargas and Kathryn Manz dislodged the item from the toddler’s throat. The toddler was rushed to the hospital and then sent home, where they were “doing well,” according to an Overland Park Police Department tweet.

A Shawnee student is among three Kansans who were named National Youth and Young Adult Ambassadors by the Campaign for Tobacco-Free Kids for demonstrating leadership in fighting tobacco use in their communities.

Alyssa Canning, 16, was among 133 youth and young adults from 33 states who participated in the Campaign for Tobacco-Free Kids’ Digital Advocacy Symposium, a five-day online training session focused on building advocacy, communications and leadership skills. Canning is also a member of both the Kansas Executive Youth Council and the local group Resist.

The Youth and Young Adult Ambassadors will work with the Campaign for Tobacco-Free Kids to advocate for policies to reduce youth tobacco use at the federal, state and local levels. Such policies include ending the sale of all flavored tobacco products, including flavored e-cigarettes that are addicting a new generation of kids.