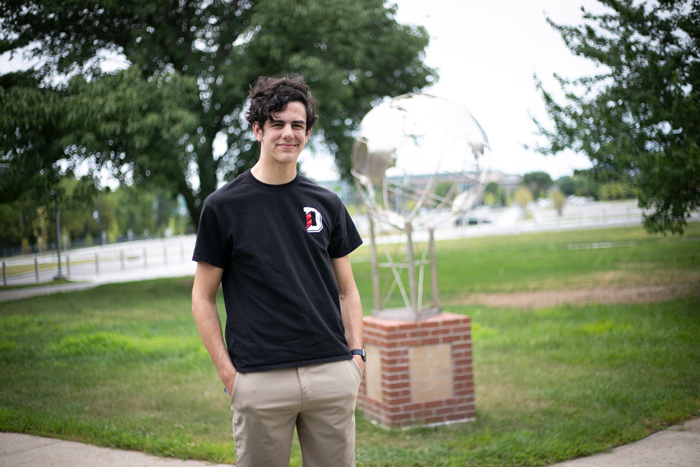 “I’ve just lived my whole life in a combination of worldviews and cultures, and I think it sparked my interest for international cultures and relations, as well as giving me a pretty solid viewpoint on how a lot of groups in America live their life day to day." Elias Henderson shares his career plans after graduating SM South this spring.

With Palestinian roots and a lifelong connection to Arab culture and language, Shawnee Mission South 2020 graduate Elias Henderson is planning a career that builds bridges between the United States and the Middle East.

“I think there’s a disconnect between American culture and Middle Eastern culture,” Henderson said. “Our countries are heavily involved on the international relations stage, and I feel like there’s a place that I could combine my interests of business, economics and politics as well as Middle Eastern studies, potentially as a career. If not, then I just really enjoy the culture and love traveling to the Middle East, and I look forward to doing that.”

The son of Drew and Nibal Henderson, he moved from Charlotte, North Carolina to Overland Park at a young age. Now, he’s returning to Charlotte this fall to pursue a degree in political science and Middle East studies at Davidson College.

Henderson is proud of his heritage, as his mother at a young age had immigrated with her family to the United States from Palestine, and his father’s Scottish/Irish side has a long, early familial history in America. He wrote his college admissions essay about his family heritage, noting the differences he saw across cultures and from living in different areas of the country.

“I’ve just lived my whole life in a combination of worldviews and cultures, and I think it sparked my interest for international cultures and relations, as well as giving me a pretty solid viewpoint on how a lot of groups in America live their life day to day,” Henderson said.

At SM South, he took four years of Arabic language courses. At one point, his class traveled to the United Arab Emirates. Last winter, he participated in the National Arabic Debate competition hosted by the Qatar Foundation in Salt Lake City, Utah.

While in high school, Henderson also took some “interesting” classes, particularly in engineering and several advanced prep courses in English language and literature, government and history. His freshman class on world regional studies was “a great introduction to high school,” he added. He also played soccer and tennis and was involved in track and the school newspaper.

“I had some of the best teachers,” he added.

Henderson is pursuing a career in international business or perhaps government work in international relations. Whatever it is, he wants to travel and serve in a “relatively important role on the global stage.”

“I just really hope I can have a career where I can make a positive impact on the world as a whole, and I think I set myself up relatively well to do that,” he said.