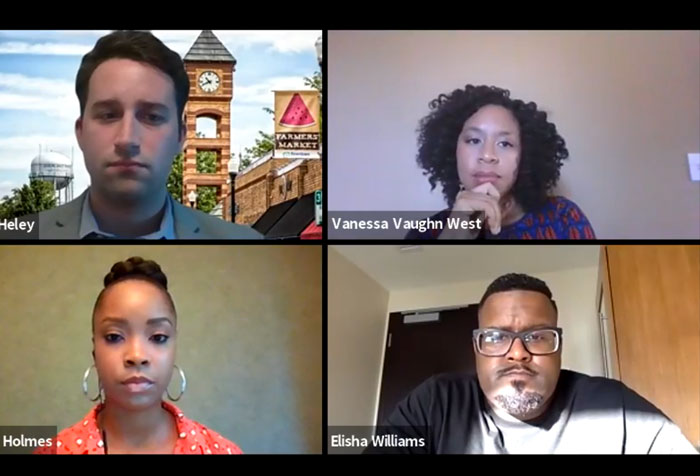 Holmes said Black Lives Matter is not discrediting the value of other lives, and the black community nationwide is screaming for help in the fight for racial equity.

“This isn’t a piece of pie,” Holmes said. “Me getting more equality does not give you less equality.”

Heley asked the speakers to weigh in on what Overland Park community leaders, including elected officials, can do about the current state of race relations. McKenzie said leaders should initiate conversations, invite people of color to the table and let them share their feelings and experiences.

West said while an invitation to the table is the first step, and once people of color are at the table, don’t expect them to adhere to the status quo. The point is to bring in different perspectives, she said, so their voices can be heard and policy changes can be enacted as a result of their contribution.

To enact change on a local level, McKenzie said she would like to see more transparency in voter demographics from the county coupled with solutions on how to get people of color to vote. Additionally, she said she would like leaders to look into establishing housing assistance programs specifically for people of color to diversify the city’s population.

Williams said leaders should be champions for communities of color and particularly Black youth who might not know where to go to seek out opportunities. Leaders should work toward constant communication and visibility of resources and services available to youth of color, he said.

Below is a recording of the racial justice conversation, as recorded by Heley. The recording is followed by a timecode with topics discussed during the event.