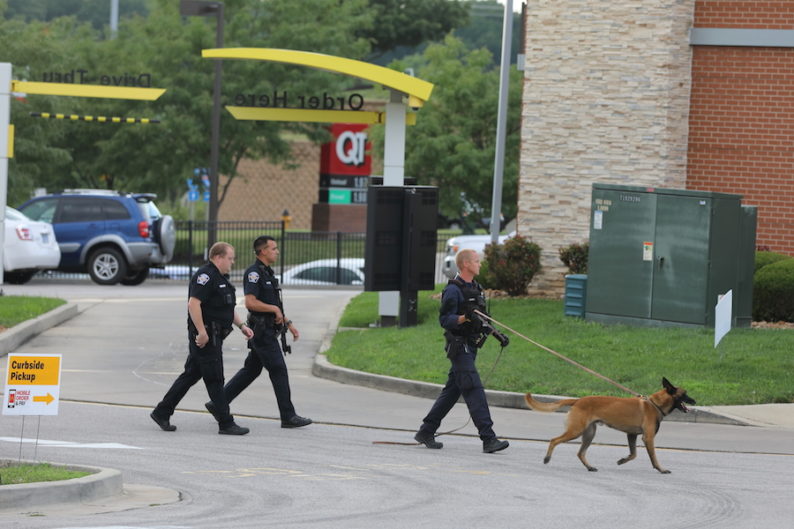 Members of the Shawnee Police Department aided in the investigation with the use of a K-9 unit. Photo credit Mike Frizzell.

Officers from multiple northeast Johnson County agencies converged on the Merriam QuikTrip Monday evening after a vehicle with two children inside was stolen.

Merriam officers were dispatched to the QuikTrip, 9025 Johnson Drive, at 5:55 p.m. A woman called 911, reporting that she left two children inside a gray 2008 Saturn VUE. When she returned to the parking lot, the SUV was gone.

Recorded radio traffic indicates officers were working on issuing an Amber Alert for the two girls, ages 2 and 5.

As more officers responded to the area, one located the SUV parked on the east side of the McDonald’s, immediately next door to the QuikTrip. Both girls were found unharmed in the vehicle. The suspects were gone.

Merriam officers were reviewing surveillance videos from both QuikTrip and McDonald’s. Both businesses remained open throughout the investigation.

Recorded radio traffic indicates the two suspects are believed to have arrived at the QuikTrip in a pickup truck. Both men were only described as “elderly” white or Hispanic males.

Officers from Shawnee, Overland Park, Mission, Westwood, Mission Hills, and Roeland Park, along with at least two Kansas Highway Patrol Troopers all responded to the area of the call. A Shawnee Police Deparment K-9 also responded and conducted an area search for the suspect.

We’ve reached out to the Merriam Police Department for additional information. Check back with this report for updates.