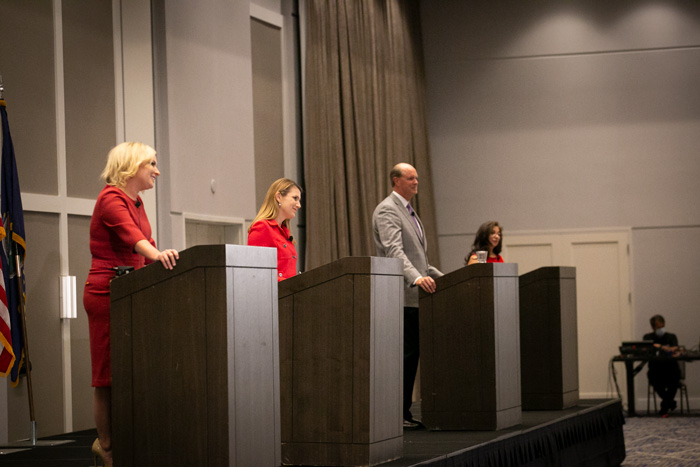 The COVID-19 pandemic, healthcare and police reform were among of the numerous subjects broached at a Republican primary debate hosted by the Johnson County Republican Party last week.

Here are the questions and the candidates’ subsequent responses, paired with the timestamps of their remarks.

This morning, Stephen Moore, one of the president’s top economic advisers said he is fully expecting Congress to pass a Phase 4 COVID relief package. How do you think a Phase 4 package should be structured?

What’s your stance on defunding the police and increasing social services, and what do you think is acceptable in that role?

Healthcare has been a featured issue in every election since Obamacare passed in 2010. The issue has been used as a boogeyman in Republican primaries for a decade with little to no substantial change, while Democrats have used the issue against Republicans, which we saw happen in this district with success in 2018. What do you think is missing from a policy perspective on the issue of healthcare?

Do you support or oppose raising the U.S. corporate tax rate above its current 21%?

As of 2 p.m. this afternoon the national debt stands at $26,520,004,522,824. What is your answer on a debt that has continued to spiral out of control, even when under Republican leadership?

What makes you specifically and uniquely qualified to beat Sharice Davids this fall?

Cases of COVID-19 continue to rise in Kansas. If you are currently in office, how would you be addressing the situation, and what would you have done differently on the national and the local level?

What is the one thing you would like to accomplish if and when elected to Congress?

“From trying to rip away Kansans’ health care during a global pandemic to backing huge giveaways for special interests and wealthy corporations, the GOP candidates once again proved just how extreme and out of touch they are with Kansas voters tonight. While the candidates fight over who most closely aligns with Donald Trump and Sam Brownback, Representative Davids is continuing to fight for Kansas families – working to lower the cost of prescription drugs, provide relief to small businesses, and stand up to Washington special interests.”