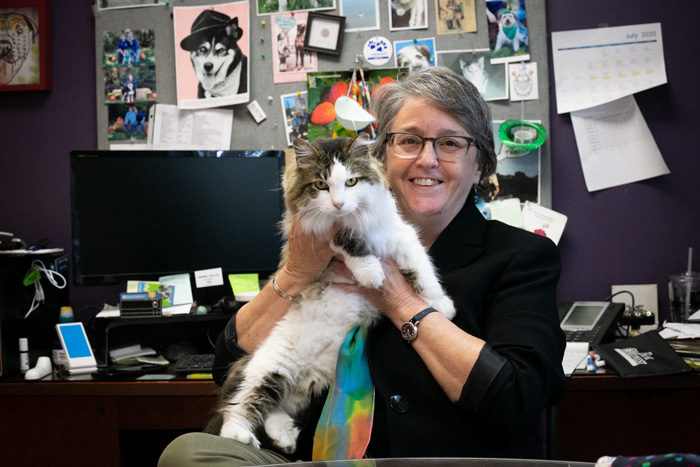 Growing up with a family history of generational florists in Johnson and Wyandotte counties, Kate Fields started honing her work ethic from a young age. But while she had years of experience in retail and business, it wasn’t the source of her inspiration. Her passion for animals led her to The Humane Society of Greater Kansas City, where she has served as the president and chief executive officer of the nonprofit for the past seven years. Headquartered in Kansas City, Kansas, the organization is home to the country’s oldest no-kill shelters and serves to improve the lives of dogs, cats “and some bunnies.” Fields earned her bachelor’s in communications at the University of Kansas and her master’s in business management at Baker University. Her professional background is primarily nonprofit. When she’s not at work, she enjoys hanging out with her dogs and drawing, lately with pencils and watercolor. She lives in Mission with her wife, Pat, and their furry kids, two dogs named Jiffy and Murfy, and a cat named Skipper.

I’ve always known about The Humane Society, but this is a really special place. I’m not just saying that.

An animal comes in, and everybody drops everything and helps it. It’s the adoption coordinators that get to know their animals, and they get to know the people, and they tell people, this relationship doesn’t stop at the adoption, we’re here for you anytime. And that’s so true because they love the animals.

The way they take care of these animals, I wish I’d come back as one of them.

Boomer was a 6-month-old grey pit. He was found, blunt force trauma, doing an army crawl around an apartment building. Animal control brought him in, and I was called over by Christine, my adoptions counselor at the time. She goes, blunt force trauma, there’s something wrong, he’s not using his legs, you need to see this dog. And I’m like oh… damn.

So I looked at Christine and said, all right, we’re on.

That dog got hydrotherapy, that dog got acupuncture, that dog got physical therapy, and that dog got a wheelchair. It was eight weeks of hell making sure it happened. We put him in a foster home, we did everything we could. We raised money to cover it.

Someone in Seattle saw that story and adopted him. He’s on the bay in Seattle, living his best life with an all-terrain wheelchair when he gets tired. He’s using his legs now, and they post all the time on Instagram, and we all follow it. It’s been five years (the dog’s name is now Murray).

That’s just one story. We had a Great Pyrenees shot in the face. We fixed her. Pearl is living her life off of Loose Park. It warms my heart.

I learn all the time here. These people teach me so much about the animals, about medicine. I learn more than I ever thought I would.

I used to think that working in a place like The Humane Society, I would be heartbroken all the time, and it’s not the case. We see so many success stories. At one point, it’s hardened me to a few things, but in general, my heart just… I can’t even explain it. It just bursts with love and humanity.