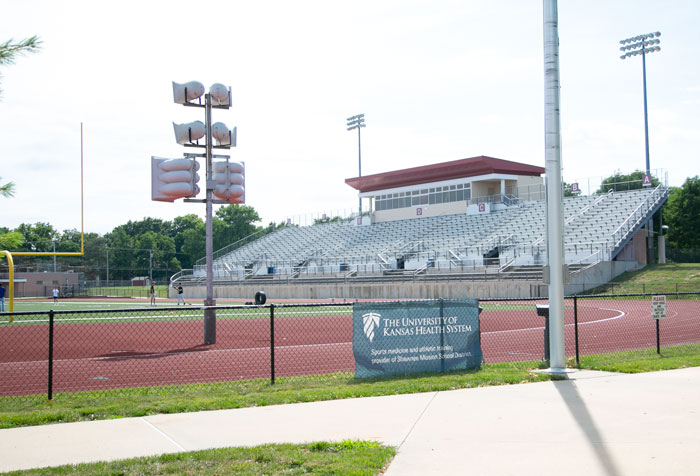 Three people wrote "BLM," "ACAB" and "Lucier" — which may have been an attempt at "Lucifer" — on a stadium wall at Shawnee Mission North.

The Overland Park Police Department is looking for three suspects who vandalized the football stadium wall at Shawnee Mission North.

Public Information Officer John Lacy said he received information about the vandalism on Tuesday, July 14 and the incident is believed to have happened on Sunday, July 12. The police department has video of three people exiting the vehicle and writing “BLM,” “ACAB” and “Lucier” on a stadium wall, he said.

“We’re asking the Shawnee Mission North community, and also the people who live in the area, that if they see anything suspicious in the area to contact the police department as soon as possible,” Lacy said. “We want to get these vandals charged, obviously. The kids don’t want that on the school, nor does the Shawnee Mission School District.”

Lacy said it’s unclear if the suspects were trying to write “Lucifer” or not. No arrests have been made at this time, but the police department knows the suspects were in a black or charcoal gray sedan, he said.

Officers are driving through parking lots to make sure the suspects don’t come back at this time, Lacy said. He said he encourages the public to be vigilant, to send in tips — anonymous or not — and “if you see something, say something.”