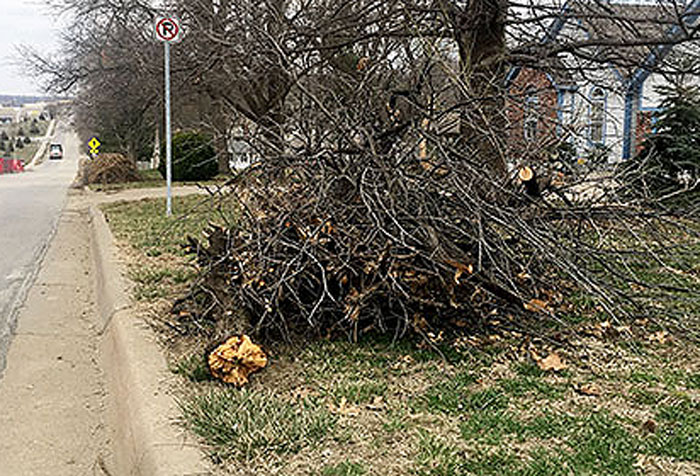 Tree limbs larger than a pencil can be placed curbside and will be picked up by Merriam Public Works between July 20 and July 24. Photo via city of Merriam's Twitter.

Residents who wish to participate can trim their trees and place branches curbside by 7 a.m. on their designated pick-up day. A map to determine your pickup day can be found on Merriam’s website here.

Limbs larger than a pencil should be placed in front of homes and away from fences, overhanging tree branches, power lines, streetlights and fire hydrants. Other debris should not be placed in the pile and will not be collected by public works.

For additional information or questions contact Merriam Public Works at (913) 322-5570.

The Shawnee City Council on Monday unanimously agreed to allow sanitary pump stations to be constructed in the 500-year flood hazard area at the site of the Heartland Logistics industrial park. The industrial park is under construction at 43rd Street and K-7 Highway.

The developer requested the city amend its Floodplain Management Regulations pertaining to Critical Facilities, according to city documents. The park is located in an area of Shawnee where gravity sanitary sewer service is unavailable. In order for this area to develop, Shawnee and the developer worked with Johnson County Wastewater to allow the construction of the temporary pump station to service this area until a permanent system is constructed.

The city council also unanimously agreed to award a roughly $4 million contract to HB Construction to make public improvements near the private development.

The Shawnee City Council on Monday unanimously agreed to amend the city code to allow bicycles, rollerblades, skateboards and other wheeled forms of transportation on the shared-use path downtown.

The shared-use path was completed along the east side of Nieman Road from 55th Street to Shawnee Mission Parkway as part of the city’s public improvements project downtown. The path is wider than a sidewalk to allow room for pedestrians, skaters, joggers and other non-motorized users, according to city documents.

The city council also discussed interest in lowering the speed limit downtown to make the area more pedestrian friendly. City Manager Nolan Sunderman said transportation staff is reviewing traffic data on the area to provide more information for the council to consider at a future meeting.

Shawnee resident Karmen Dillon said she agreed with the concept of lowering the speed limit to make the area safer for pedestrians as well as cyclists.