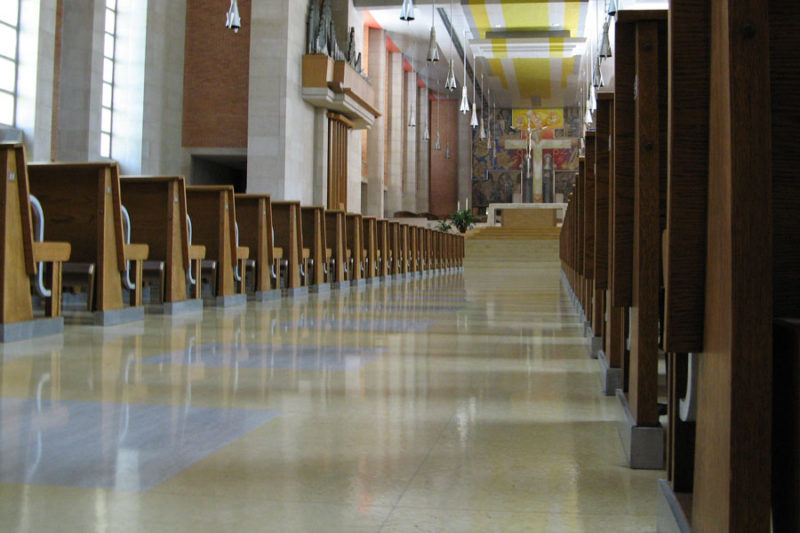 For the last few months, some religious activities across the country have had to adapt to continue their worship without putting their communities at risk.

In Kansas and Johnson County, religious gatherings have been a contentious topic. Some of the earliest known clusters in the area were associated with religious gatherings, and as Easter, Ramadan and Passover celebrations neared, Gov. Laura Kelly required religious activities to abide by the gathering limitations in place at the time.

That didn’t fly without opposition. In a battle between the state legislature and Kelly, the Kansas Supreme Court sided with the governor with just hours to spare.

Since then, gathering size limitations have relaxed and some local religious organizations have started resuming in person activities, but nothing is like it was before the pandemic. Some places haven’t opened their doors yet and don’t have plans to for the foreseeable future. Others have opened, but are making use of outdoor spaces or enforcing strict social distancing.

At the Islamic Center of Johnson County in Overland Park, some in-person gatherings and activities have resumed, but it looks different than it did just a few months ago, Secretary Board of Trustees Tariq Aziz said.

Towards the beginning of the crisis, the center actually closed for two months. Ramadan, the sacred month for Muslims, happened during the closure.

“We had the community engaged in islamic activities, over Zoom while they were not coming to the mosque,” Aziz said.

But it’s not a perfect fix, Aziz said. For example, people can’t pray over Zoom, but virtual communication does allow you to hear the teachings.

“You are involved in community activities, but cannot pray as a congregation,” Aziz said.

In the last few weeks, the center has scaled its reopening, bringing back in-person activities one at a time with some limitations. When the process began, they prayed in the parking lot for one of the five daily prayers. Aziz said being in the outdoor space allowed for more physical distance. Classes, like Quran school, have also been relegated to Zoom.

Activities have resumed in the physical building, but there are some limitations still, like the expectation that everyone brings their own prayer rugs, the closure of bathroom facilities and temperature screenings at the door.

“We are following it by the book,” Aziz said. “It is not the same way as we used to pray, but we are following all the requirements so that we make sure that we are safe and we keep the community safe.”

The center is prepared to back track to completely online practice if the situation necessitates it, Aziz said.

“As a Muslim society we are very perceptive and cognizant that we have to keep the community safe,” he said.

The pandemic has had a similar impact on people of the Sikh faith.

Swinder Singh, member of Midwest Sikh Gurdwara, said the building had to close down in March because of the mounting crisis.

When reopening did start, Singh said, they followed all guidelines from the Centers for Disease Control and Prevention, including enforcing social distancing and posting signs about mask-wearing.

Generally, people have been receptive to the added preventative measures, but attendance has been down, Singh said. For people who don’t feel comfortable coming into the building, they are offering virtual prayer and utilizing Facebook live.

“We are able to achieve … our religious practice,” Singh said.

In a time when a lot of people are refraining from shaking hands, Singh said that hasn’t affected people of the Sikh religion because that’s never been how they greet others.

“We fold our hands and say the greeting, Singh said.

Churches are adapting to the changing climate as well.

Countryside Christian Church in Mission serves a predominantly older, but small congregation. In the beginning of the pandemic, the doors to the church were closed and only people essential to putting on the service online, like the choir director and the piano player, were permitted inside.

In-person worship has resumed, but online services — which were made available for the first time in 2017 — are still an option for those who don’t feel comfortable returning yet.

Rev. Roger Beason estimates that maybe 70 percent of the congregation has returned.

“There are actually still several people that are in long term care facilities that are not allowed out yet,” Beason said.

On the premises, social distancing and mask-wearing policies are in place, and pews are staggered. The choir, which usually gather to sing near the pulpit, have not returned in a formal capacity, Beason said, and he doesn’t expect them to until at least September.

The last change —  the lack of a formal choir — falls in line with guidance from the University of Kansas Medical Center to avoid singing.

“At this point in time, singing at church is a very dangerous act to do,” Dr. Dana Hawkinson, medical director of infection prevention and antimicrobial stewardship, said. “We know that there are documented cases, large cases of people at choir practice and during those large gatherings who have spread the disease in a super-spreader manner.”

A super-spreader is someone who infects several people in one contact event, Dr. Hawkinson said.

Beason said people at his church have been pretty open to the changes, and he hasn’t heard any complaints.

“We’ve been very careful about what we do,” Beason said. “We want to provide a good spiritual experience without putting people in danger.”

For Village Presbyterian Church, that meant shifting completely online for all worship indefinitely. Senior pastor Rev. Tom Are said that recently the board of directors of the church reaffirmed that decision, meaning virtual worship will continue indefinitely.

“We have not set a date that on-site worship will reconvene, as we cannot predict at this time when risks of spreading the virus will decrease,” Are said.

It’s part of an effort to not only protect the health of the congregation, but “for the larger community” as well, Are said.