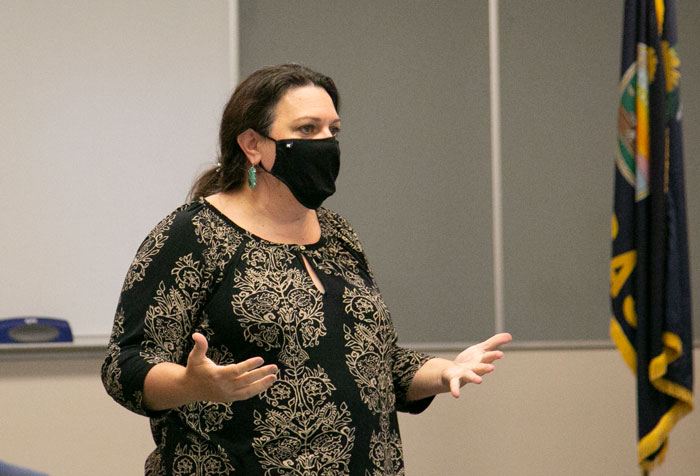 As a mother to a black son, Councilmember Courtney Eiterich asked colleagues to discuss a statement as well as to stand up for injustices and listen to people of color without judgment.

Following a review of the Lenexa Police Department’s use of force policy, the Lenexa City Council expressed interest in a city staff-drafted racial justice statement.

Councilmember Courtney Eiterich said as a mother to a black son, she wanted to discuss a potential statement and how the city council can include equity in all of its policy considerations. She asked the city council to commit to conversations about race, to stand up for injustices and to listen to people of color without making judgements.

Police Chief Tom Hongslo released a statement on behalf of the department following the death of George Floyd, in which he said officers have the duty to intervene in such incidents. Multiple members of the governing body said they would like the city’s statement to build off of Hongslo’s sentiments, though it would be separate from the police department’s statement.

Councilmember Dan Roh suggested the statement be tied to the 2040 vision for the city, as a way to ensure the statement drives the city toward a better future. Roh said he doesn’t think speed is the key factor here, but the city should think the statement through carefully to get it right.

Councilmember Joe Karlin said he is scared to talk about race because he’s afraid to say the wrong thing. He said one of his concerns is creating a statement that emphasizes Black Lives Matter, which “seems to be just about police violence against blacks.”

“Our police are under enough stress right now,” Boehm said. “I don’t want to do anything that encourages whoever the group is out there — left, right, middle, racial, ethnic, religious whatever it might be — that Lenexa, because of some statements we’ve made, becomes the hotbed of activity in Johnson County.”

City staff will draft a statement and bring it forward for the city council to review and workshop at a later date.

Prior to the discussion about a racial justice statement, Chief Hongslo and Capt. Brett Rushton provided the city council with a review of the department’s use of force policy. As of July 14, the Lenexa Police Department had 24 use of force incidents, Hongslo said.

The department received 27 complaints in 2018 from more than 45,000 service calls, Hongslo said. Over the last three years, the department has received five biased based policing complaints, one in 2017, three in 2018 and one in 2019, he said.

Less than 1% of people who apply to the department are hired, and — despite openings — only four of the 621 applicants were hired in seven-month period last year, Hongslo said. The department doesn’t hire just to fill openings, he said. Hires have to be the right fit.

“We hire people with good values, good ethics, good morals, we know are good people and believe can be good police officers,” Hongslo said. “You can’t train that, they already have to have it.”

Hongslo also discussed where Lenexa stands in regards to the #8CantWait initiative, a national campaign calling on immediate change to police departments following the death of George Floyd. Hongslo said the department easily answered the inquiries about the policies in question (found here) because the department had already been implementing many of the policies for years.

Capt. Brett Rushton continued the review with details about the science behind use of force and options available to officers. Additionally, Rushton showed the city council recorded examples of use of force incidents within the department, all of which are investigated by an outside party.

After the death of George Floyd and the nationwide protests, one Lenexa police officer has left the department, Hongslo said. Roh asked how the governing body can better assist the police department, and Hongslo said to support them.

“Make sure you support officers on the street,” Hongslo said. “Let them know they’re doing a great job, [and] as long as they are, you’ll always be there for them.”