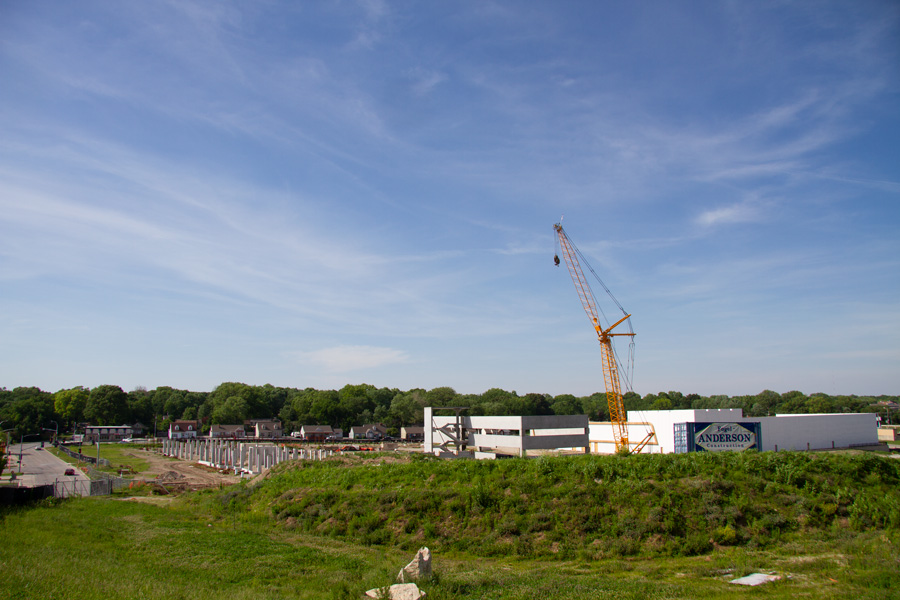 It's been nearly 15 years since the Mission Center Mall closed at Roe and Johnson Drive. Construction on the long-awaited mixed-use project on the site has been halted as a result of financing issues caused by the pandemic.

The city of Mission will likely consider pushing back the December 2021 construction completion deadline in its development agreement on the Mission Gateway project to accommodate construction delays.

GFI Development and the Cameron Group, the project’s developers, announced one month ago that construction had to pause indefinitely after two funding sources were put on hold due to the coronavirus pandemic.

The development agreement sets a construction completion deadline and the terms of the city’s tax incentives for the Gateway project, which include the Gateway development’s access to revenues from a tax-increment financing (TIF) district and a community improvement district (CID). If the project does not meet the December 2021 deadline, the developer could be in default of the agreement, putting the tax incentives in jeopardy, said City Administrator Laura Smith.

But Smith emphasized the city’s strong desire to see a mixed-use project on the site come to fruition. As such, the city will likely consider adjusting the timeline to reroute the project for a later date, Smith said. The request to reset to the deadlines would first have to come from the developer. To date, no request has come — though the city anticipates it will.

Smith said it’s likely that request will come once renewed funding for the project has been locked down.

“Obviously with the coronavirus situation, there’s likely going to be a need to revise those timelines,” Smith said. “We could try to do it now and guess, but we’d likely guess incorrectly, and we’d come back trying to revise it again.”

Mission Gateway’s latest funding challenge occurred as a result of a private lender putting their financing on hold alongside the city’s inability to sell special obligation bonds.

The project’s private lenders include the Metropolitan Commercial Bank, Bank OZK and Cottonwood Group. Smith said that Cottonwood Group is the source that paused its lending, and that the developers are exploring alternate lending options while continuing to work with Cottonwood.

Cottonwood Group is among the prospective lenders. A spokesperson said the group “declined to proceed with the transaction due to the project’s developers not being able to satisfy certain required underwriting conditions unrelated to the coronavirus pandemic.”

Smith said that the city “did not have final executed loan documents from either lender,” and thus was aware that a lender backing out was a possibility. To move forward with issuing bonds, these loan documents must be in place.

This is not the Gateway project’s first experience losing funding in the midst of an economic downturn. The 2008 housing crisis hit the project head-on and made it difficult to secure capital.

“It made it much more difficult (for developers to get funding),” said Laura McConwell, who served as the mayor of Mission between 2002 and 2014. “Up until the lending crisis, they didn’t have to have a signed contract from tenants. They could have letters of intention. After the housing crisis, you had to actually have tenant contracts. So it was really difficult.”

A recent article also noted that GFI was put on credit watch with a negative outlook by S&P Global Ratings. The company owns many hotels, which have struggled to profit throughout the pandemic.

Smith said she was not aware of any relationship this had to the Gateway project’s funding hold-up.

The tax incentives spelled out in the development agreement include the TIF and CID, which are in place over 20 years and 22 years, respectively. The start date of each of these tax-incentives has already begun — the TIF in January 2020, and the CID on July 1, 2020 — despite the project’s incomplete status.

Starting the tax incentives before the project is complete means that the developer may not be able to generate the maximum amount of revenue from them.

Smith said that there are some options available to restart the CID clock at a later date, but the city will not move forward with doing so until funding is back on track for the development. Restarting the TIF clock is more difficult, she added.

Additionally, Smith said that the developer is up-to-date on all of its taxes, including the $600,000 annual payment to the city, meant to repay storm water development work done by the city years ago.

The entertainment and hospitality industries have been hard-hit by the coronavirus pandemic, with each industry losing billions of dollars since mid-March. But Smith said that the anchor tenants of the Gateway development, which are part of these two industries, are still in place. This includes Cinergy Entertainment, a food hall by Tom Colicchio’s Crafted Hospitality and a Marriott hotel.

“We know the developer is in conversations with their tenants regarding impacts to operations in light of COVID-19,” Smith said.

This past May, Andy Ashwal, vice president and senior asset manager of GFI Development Company, said that the Tom Colicchio food hall was being designed to easily shift to take-out services when necessary, in light of the pandemic.

A spokesperson for Cinergy declined to comment. Crafted Hospitality and a Marriott spokesperson did not respond to emails asking for comment. Marriott International Inc. saw a 92% decrease in their first-quarter profit of 2020 as most traveling came to a stand-still amidst stay-at-home orders.

As Mission Gateway delays continue, here’s a timeline of how we got here