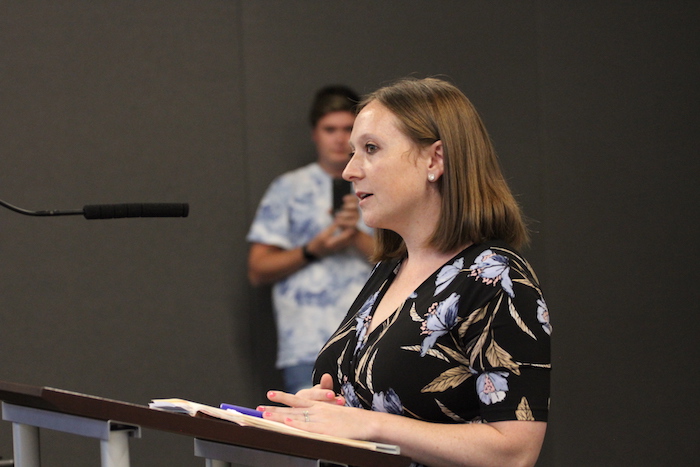 Councilmember Jenna Brofksy spearheaded the sustainability conversation, and said the city council should push for it with the Stroud's redevelopment. File photo.

The Fairway City Council on Monday evening unanimously approved a joint statement on racial equality after a tense back-and-forth regarding the statement’s content and “teeth.”

The joint statement builds on June comments released by Mayor Melanie Hepperly and Police Chief Dave Brown condemning George Floyd’s killing, and emphasizes that Fairway respects and values the inherent worth of every person.

“Race-motivated actions against African Americans and other minority groups should compel all of us to support and have empathy for those who have experienced the pain of inequality and humiliation as a result of discrimination,” the statement reads.

While all councilmembers expressed their support for the statement, Councilmember Jenna Brofsky said she thought the city had an opportunity to be a little bit more bold and acknowledge people’s feelings.

“I think there are a few things we can do to make it a little more meaningful, because I’m afraid that as written we’re not quite getting at the issue here,” Brofsky said. “I think the reason people are angry and protesting has to do with greater recognition of racism, not just the death of George Floyd.”

Following her initial thoughts, Brofsky said she was interested to see the title changed from a joint statement on racial equality to a joint statement against racism. Mayor Melanie Hepperly said the governing body would not be wordsmithing the draft, rather, she wanted to hear the city council’s thoughts on the draft.

Councilmember David Watkins said it was his understanding that the city council would not be editing the draft, either. Brofsky said since it was the first time the city council had met as a whole, she thought there would be a chance to discuss it together.

After a motion and a second to approve the statement, Brofsky repeated her disappointment regarding the lack of discussion. Councilmember Dan Bailey said he had no issues with the statement, but he thought there was “a better way to go about it than not allowing discussion” or changes to the document.

Brofsky then asked if any fellow councilmembers would be amenable to include the word racism in the draft. Hepperly said racism is a divisive term, and she didn’t think the city needed to “add a polarizing” word to the statement.

“I like the word equality,” Hepperly said. “We are all equal — every single one of us. That represents Fairway, it represents the residents that have commented to me and their feelings, and I feel that that is the way it should read.”

Hepperly and Brofsky had a brief back-and-forth about including the word racism rather than equality. Brofsky asked if equity could be an alternative as it indicates that not everybody is on the same playing field. Hepperly stood by the usage of equality.

The city council unanimously passed the joint statement, and shortly after, Fairway resident Amy Thompson asked if any people of color were involved in the drafting process.

“If there was no one of color on this committee that pulled this document together, I’m concerned we’re just speaking from white privilege, because it does exist,” Thompson said.

Hepperly clarified that a committee did not draft the document, it was a joint statement from the city council. Thompson said while Fairway lacks diversity, there are some residents of color and it would have been beneficial to reach out for their potential input.