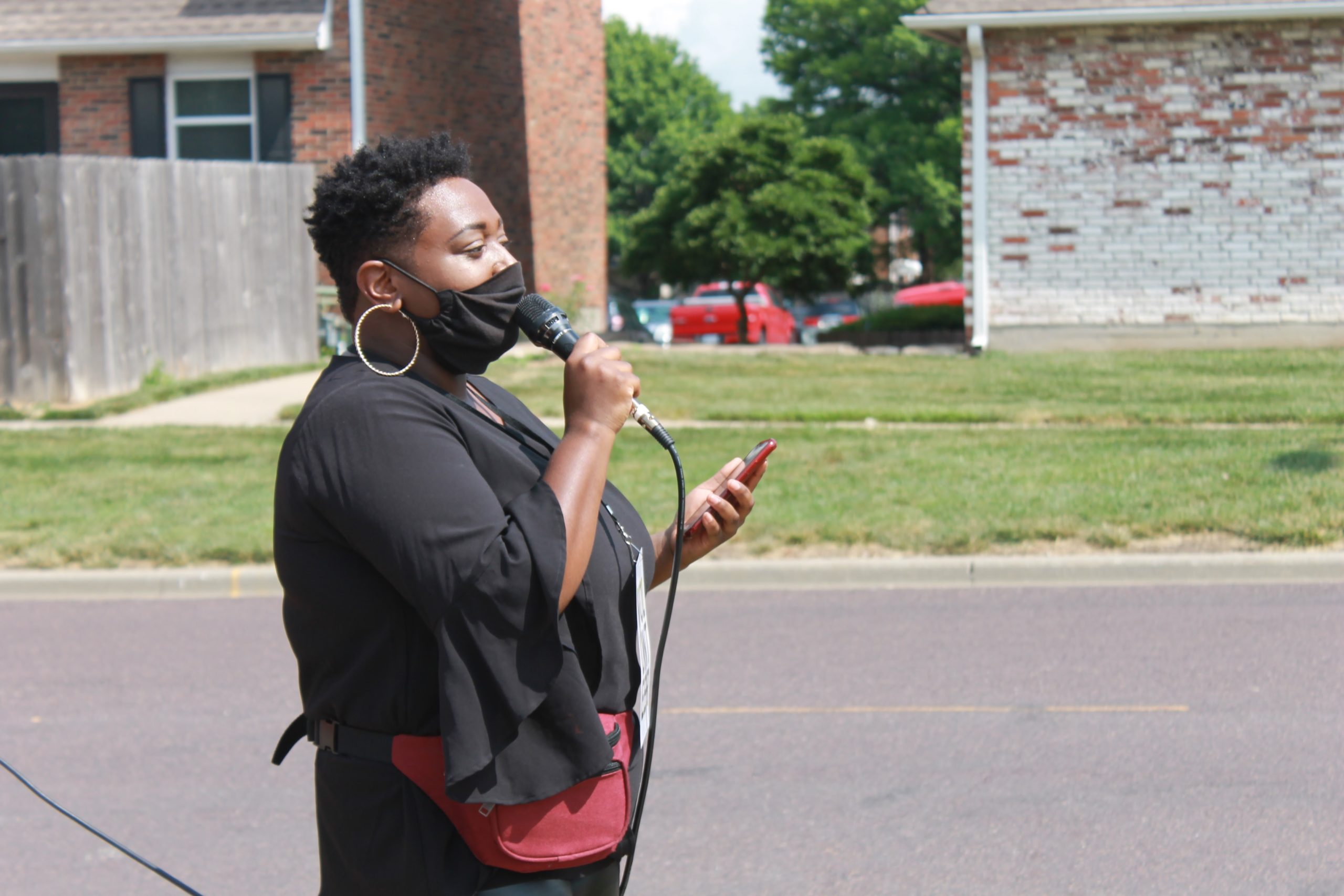 Linnaia McKenzie, who recently organized a Black Lives Matter demonstration in Overland Park, said she would like to see more transparency in Johnson County voter demographics and solutions to get people of color to vote. Additionally, she said she would like to see housing assistance programs specifically for people of color to diversify the city's population. File photo.

The fact that there’s a culturally diverse citizen advisory board in Overland Park that looks into complaints of racial profiling by police came as news to Linnaia McKenzie this spring. A life-long city resident and co-founder of the Advocacy and Awareness Group of Johnson County, McKenzie, had been organizing an event in Downtown to raise awareness and support Black Lives Matter when she first heard the city had such a thing.

She wouldn’t be alone. Even people heavily involved in city policing issues acknowledged that most people probably don’t know about the board.

But then the Independent Citizen Advisory Board for Racial Profiling and Non-biased Policing – “bias board” for short – does tend to have a low profile. It only meets once a quarter and the meetings are in closed session. With the exception of an abrupt resignation of one of the board members a year ago, the doings of the bias board mostly go unreported to the full city council.

Now that protests and marches following the killings of George Floyd and Breonna Taylor, among others, have put police treatment of people of color in the spotlight, though, some city leaders are saying it’s time to take fresh look at whether the board is effective.

“We’re exploring how to make the process a little bit better,” said Councilmember Paul Lyons, chair of the council’s public safety committee. “It’s important that the members of the board feel like they’re getting a complete picture of what happened so they can make an informed decision.”

Sheila Albers, founder of JoCo United, is more blunt. “I have heard people refer to it as a sham,” she said.

It isn’t easy to find out firsthand about what the board does. It doesn’t meet at City Hall like most other committees. Instead, members head to the W. Jack Sanders Justice Center, about six miles away. Once there, they receive a police department summary of a case where bias is suspected. They discuss it in closed session. The details of discussions are never summarized for the public. The minutes only list a case number and say how long the discussion lasted and whether the board supports the investigator’s conclusion that no bias took place.

Board members hardly ever find outright bias against the officer. But they sometimes do disagree on finer points of how an encounter is handled and suggest improvements, said Catalina Velarde, chair of the bias board. That’s as far as the citizen board can go, though. Discipline is handled separately.

The information coming to the bias board is controlled completely by the police department. Complaints about police conduct are routed to the Professional Standards unit for a follow-up with the complainant. The investigator determines if there is a possibility of racial profiling or bias.

If so, the investigator paraphrases the complaint and presents it to the board. “Many times the complaint involves personal information, foul language, complaints about non-OPPD matters, etc.,” said the city’s written response to the Shawnee Mission Post about police procedures. “However the actual allegation is presented.” The discussion is in closed session because it is considered a personnel issue.

The board’s decision is based on that police summary. The complainant does not present an argument at the discussion.

McKenzie found that amount of police filter troubling. The board, or at least a neutral third party, ought to be seeing the complaints that come in and also more raw evidence rather than a police department summary, she said. The board does not currently get to see body or dash cam footage, for example.

“If it is going to the police department first, that’s something I wouldn’t feel confident about,” McKenzie said.

Albers, who is white, said she’d like to see the board’s authority expanded to include other types of complaints besides bias. She said she tried to get the board to hear a complaint about police action when her son, John, was killed by an officer in 2018, but was refused because it was not a racial issue.

Nevertheless, Albers said the board needs more power to investigate. “If we’re going to be truly transparent and engage our community then that advisory board should be addressing any police misconduct in a transparent manner way more than four times a year,” she said. “They are powerless and it makes a joke out of what should be some really serious work that should occur in every city.”

Velarde acknowledged that the police control over the information could cause some questions. “The model of oversight the committee uses does rely on mutual trust. If the community feels that is not where the situation is at this moment then that would be up for debate.” However the department has shown a willingness to listen and has been responsive when incidents arise, she said.

Another issue, for McKenzie, is the makeup of the board. Although the board has a diverse mix of ethnicities, there should be a Black man among its six members, she said, or maybe more than one, given how often Black men fall under suspicion.

“Representation matters,” she said. But because marginalized groups are not used to feeling welcome, “it takes city officials meeting us half way – maybe some kind of marketing campaign to advertise we need a Black man to sit on this board to really fulfill its purpose. Otherwise it makes me think that it’s just there to be there,” she said.

Until fairly recently the board did have a Black man. But about a year ago Richard Kaiser resigned under protest, for reasons neither he nor the city would disclose.

Being the only person of color in the room makes it hard to speak up because of the impression others might not understand, McKenzie said. “Especially if you’ve lived in privilege your entire life, you don’t understand what it feels like to have police driving behind you and you’re going the speed limit and you’re driving clean and there’s nothing wrong but you’re still scared because you’re Black. That’s really hard to explain.”

At the very least, the bias board needs a higher profile, said officials and volunteers involved in the board. McKenzie said she was happy to see the police support at the march, it’s important to keep a dialogue going. “They’ve given us their word that their ears are open so we have to speak up,” she said.

Councilmember Paul Lyons, chairman of the council’s public safety committee, agreed the board needs to be better known. He and Councilmember Chris Newlin, chair of the mental health task force citizen advisory committee, both said they have heard stories from constituents of encounters with police that might have merited an investigation for bias but were never reported because the people didn’t know there was a way to do so.

That may be reflected by the low number of complaints. According to figures provided by the police department, there were seven complaints in 2017 and one in 2018. The numbers for 2019 and this year were a little unclear, though. Initially the department said there were eight complaints in 2019 and four so far this year, but later corrected that, saying there were only six last year because two of the original eight were actually from 2020.

The bias board is supposed to hear every case, but only heard four of the six cases last year, according to Major Ryan Miller of the police Professional Standards unit. Two are pending because the board has not met due to COVID-19, he said. However only three cases were accounted for in the 2019 board minutes.

In fact, the board has a better presence on the city website since its recent redesign, Velarde said, and the board has been more vocal about advertising itself.

“I don’t have a true sense of what the community knows about the existence of the board but certainly I believe it is becoming more well known and that is great,” Velarde said.