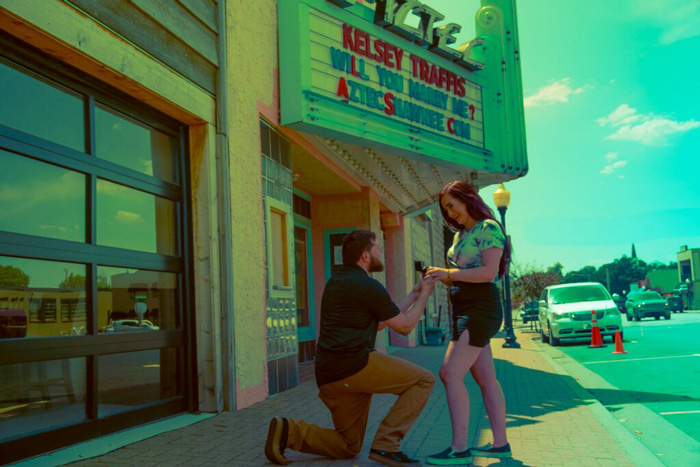 James Krehemker proposed to his girlfriend Kelsey Traffis under the marquee of Aztec Theater in downtown Shawnee. The Shawnee couple got engaged on their third anniversary June 30. Photos credit Ian and Brennan Pittman, Studio 48.

James Krehemker had the whole day planned out.

The young man was going to propose to his girlfriend, Kelsey Traffis, on a special afternoon June 30 — the third anniversary commemorating the day the Shawnee couple started dating. The owners of Aztec Theater in downtown Shawnee had just completed Krehemker’s proposal on the marquee on Johnson Drive, and he was going to bring Traffis to the theater and ask the big question.

Only one tiny problem: On the way to get some breakfast earlier that day, the couple drove by the theater and Traffis caught a glimpse of the marquee before the planned proposal.

“At first, I didn’t realize it was my name, I just saw it and I was like, oh they have the same name as me, that’s really cute,” Traffis said. “And then I was like, wait a minute, that IS my name!”

“It was kind of ruined at first,” Krehemker said. “When we drove by, she looked at me, she was like uhhhhhh… is there something you need to tell me? I was like I don’t know what you’re talking about. She said that sign just had my name on it!”

“He acted like I was crazy,” Traffis added, laughing. “He got a phone call, and he was distracted. I’m sure he wouldn’t have gone down that road if he’d realized, but he was talking on the phone.”

The rest of the drive (they got Taco Bell breakfast), Krehemker explained that the marquee was part of his proposal to her. But after discussing it, they decided to wait and stick with his plan.

“She pretty much had a smile on her face the whole rest of the day,” Krehemker said.

Traffis had an inkling that he was going to propose. She and her best friend had planned a trip to Las Vegas for that weekend, but then the COVID-19 pandemic combined with her friend’s mysterious family plans that cropped up forced them to cancel their trip.

“I had an idea, but nobody was letting on,” she said. She stuck with her gut feeling and got her nails done ahead of time.

Upon returning to the theater in the afternoon, Krehemker asked her for her hand in marriage, and she “definitely” said yes. Their family came out from around the corner to celebrate, another pleasant surprise.

The couple doesn’t have a date yet but is planning a wedding for fall 2021.