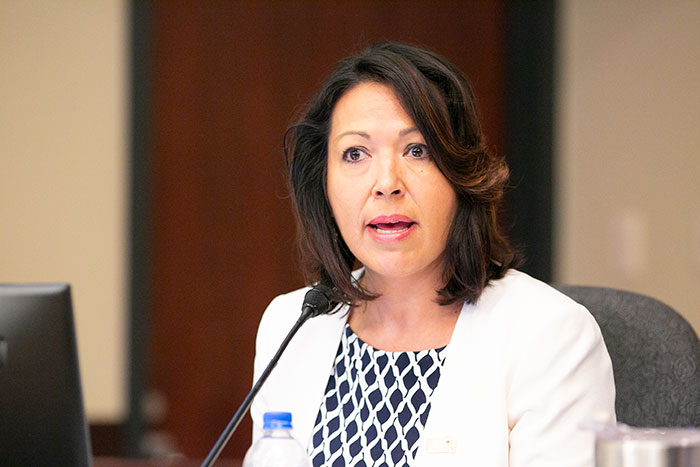 County Manager Penny Postoak Ferguson's 2021 budget would not require the county to use reserves despite revenue downturns from the coronavirus shutdowns. "Some local government would make their approach that reserves are meant for times like these but we were trying to do it without,” she said. File photo.

The budget fallout from the coronavirus pandemic has been bad, but not as bad as expected in Johnson County. A first look at a 2021 county budget showed that although tax revenues are expected to be less than originally predicted, County Manager Penny Postoak Ferguson hopes to be able to keep the taxing rate steady without dipping into reserves or making big cuts to services.

Postoak Ferguson presented her proposed budget on Thursday. It’s a first step in the process that will set county taxes and spending for the coming calendar year.

The $1.25 billion budget would be met with an estimated 19.036 mill levy for the county taxing district, 3.904 mills to support the library system and 3.090 mills for the park and recreation district.

The total budget includes $931.5 million in spending with $321.5 million in reserves. The biggest part of the reserve fund is $162 million for wastewater for expenses related to the new Tomahawk wastewater treatment plant in Leawood.

The budget also includes 4,107 full-time equivalent positions, which is 18 fewer than for this year.

Postoak Ferguson said it is “no small thing” that the county will not need to use reserves to get through the rest of this year. “Some local government would make their approach that reserves are meant for times like these but we were trying to do it without,” she said.

The outlook for the budget has improved somewhat from early spring, when major revenue shortfalls were predicted. The county’s first COVID-19 case was March 7 and the shutdowns that followed upended all the predictions about how much would be coming in for the county to meet its expenses.

County budget experts laid out three scenarios in April, with shortfalls this year ranging from $18 million to $38 million. But by June, the shortfall for the current year is expected to be $15 million, which is better than the original worst-case scenario.

In the meantime, the county expects to save close to $25 million this year from various cost-cutting measures, including furloughs, vacancies unfilled and reductions in projects.

The county managed to dodge some of the revenue hits this year, said Budget Director Scott Neufeld. Delinquent spring property tax payments were not as high as they could have been, possibly because they came due when people had the money already set aside, he said. And although sales tax was down, the use tax, made on purchases outside the state, was up.

Neufeld said a “modest recovery” looks possible for the 2021 budget year. If it holds, the shortfall next year should be around $3.2 million. Sales tax is likely to continue to be about 8-10% lower, he said.

Postoak Ferguson advised that the county may need to plan for some extra contingencies if there is a big increase in employee healthcare costs. The hiatus of the state Board of Tax Appeals may also have an effect. The board, which hears appeals on such things as big box property appraisals, will not be able to resume meetings until new appointments are made. Currently there are not enough members for a quorum.

Neufeld estimated the appeals on hold could end up costing the county $15 million in the worst case.