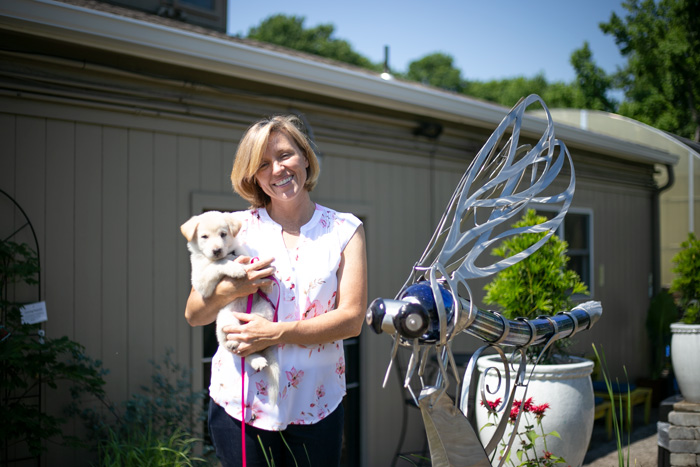 When local artist Amie Jacobsen moved from illustration into metalwork, she set out with the goal to make sure her work is approachable and recognizable for others to enjoy. Represented by the Eva Reynolds Fine Arts Gallery in Prairiefire in Overland Park, Jacobsen runs her own studio in Merriam called Amie Jacobsen Art and Design. Originally from Colorado, she studied painting and illustration at university. She has a few art pieces installed around the Shawnee Mission area, including a damsel fly sculpture in the Family Tree Nursery in Shawnee. She and her husband, Tim O’Neill, designed and produce “sneeze guards” made from steel frame and plexiglass for the National WWI Museum to use during the COVID-19 pandemic. When she isn’t at the studio, she enjoys kayaking and outdoors, as well as painting and playing with her new puppy, Dagny. She and her husband live in Independence. They have three young adult children.

I’ve always been an artist of some kind.

I started out as a painter, went on to get a degree in illustration. I’ve actually been a single mom since my kids were very, very little. I was married young and divorced young. So I had two little kids and took them with me to grad school in Savannah, Georgia — I left Colorado to do that — and then moved here, and I was illustrating and teaching e-learning classes for the Savannah College of Art and Design. And I just got burned out.

I was illustrating children’s books at the time, and I got really burned out from teaching online and illustrating. It wasn’t the right fit, I didn’t know what I was doing.

So I started just painting again, painting just to paint things. And I thought, I’d like to go back and work in a gallery again or put artwork into galleries again.

I started teaching some classes at a little gallery called Artichokes, there’s a local artist that owned this gallery, it’s closed now. It was a really fun place. And I just started doing gallery work again.

And I thought, it would be cool if I could learn how to do metalwork and I could put metal pieces through it with plywood and building supplies.

From that idea, one night I was up painting and I was watching Arts Upload, which is on PBS, in like the middle of the night, and I saw a little episode about a metal shop in the Crossroads, the place is called Machine Head, and he had an artist he was working with. I called him the next day and asked him if he knew where I could learn how to weld.

And he said well, I take on interns and they do odd jobs for me around the shop and clean the shop and I teach them some welding. So I went down and checked it out, and two months later, I was working full time for him. I became his in-house designer and resident artist. And he taught me metal fabrication.

For the next two years, we did all kinds of projects. And I just started experimenting with art pieces. We just did a huge range of things — furniture pieces, little pieces for the hospital, railings, gates you name it — all kinds of things came through his door.

It just kind of came naturally. For me, I had never worked in 3D before, but I found that from illustrating and having to draw things to look like they’re in 3D, I had really had to think about space and I just ended up having a knack for being able to think about things in 3D space.

I just like the idea of being able to take a bunch of raw material and come up with a form and be able to twist and bend and craft something that becomes an object that you can put into a location, and it helps make the space what it is, you know what I mean?

There’s some abstract, there’s some representational, but it’s not like realism. They’re definitely stylized.

A lot of my pieces — as far as my metalwork — have been more representational. I’ve done a few different insects, the butterfly, the damselfly, sculptural pieces, because I really like things that everyone can understand. They can look at them and they can get them.

So while there are a few abstract pieces that are basically just cool shapes and textures and forms — and lots of times, people respond to that, it doesn’t have to look like something specific — I really like doing things that are understood by everybody.

I think that it’s important to connect with everyone who comes in contact with it, so they’re not looking at it saying I don’t get it, what is it? They’re looking at it and saying oh, I get it, that’s cool, I know exactly what this is and it’s done in a cool, unique way. It’s not necessarily copying reality, but it’s still a recognizable thing that anybody can connect with.