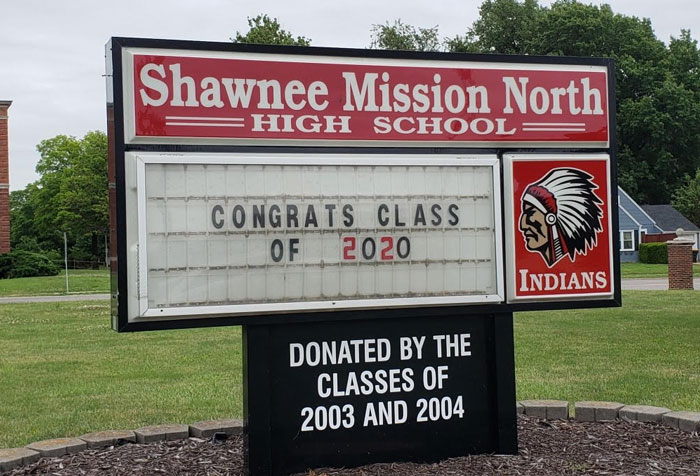 Emmitt Monslow, a Native American and 2012 Shawnee Mission North alumnus, supports keeping the Indian mascot and is working against efforts to change it. The Indian mascot is prominently displayed throughout the school's campus, including on its marquee, pictured above.

As someone who identifies as Native American, Monslow said he didn’t see the mascot as disrespectful or dishonorable, rather he took pride in calling himself a Shawnee Mission North Indian. He said he started the counter petition, the same day as the original petition, to stand up to “cancel culture.”

“It’s discouraging to see these white, liberal women who are trying to cancel the mascot because they have some savior complex where they think they need to speak up for the Native American community,” Monslow said.

Although the Eastern Shawnee Tribe of Oklahoma rescinded its 1992 approval of the SM North Indian mascot in 2017, Monslow said that decision was the result of society entering the “social justice warrior” era. If the concern is lack of approval, Monslow said he would give SM North his blessing to keep the Indian mascot.

Currently Monslow’s petition has about 1,200 and the petition against the mascot has 2,500. Monslow’s goal is for his petition to gain as many signatures as the petition advocating for a mascot change, though he says he’s at a disadvantage because those who support the Indian mascot are afraid to speak up for fear of being called a bigot or racist.

“For me to stand up and actually say something, I hope it sparks that in other people,” Monslow said. “We have to stand up and say, ‘enough is enough.’ My generation cannot have everything that they want. You cannot sit here and just cancel everything.”

Michelle Giddens, a 2011 alumna who said she identifies as one-quarter Native American, said she’s been trying to bring awareness to SM North’s cultural appropriation since high school. As a student, Giddens said she refused to stand for the SM North song. Giddens said she also experienced racism as a student and was told to “go back to the reservation” by her peers.

Unlike Monslow, Giddens said she’s always seen the Indian mascot as a mockery rather than an honoring of Native American culture.

As for the petition to change the mascot, Giddens said she thinks organizers have succeeded at looking at various perspectives and respectfully hearing all viewpoints. While the collective goal to create change is positive, Giddens said “the skeletons are going to have to come out of the closet.”

“We are going to have to have that difficult conversation that, yeah,we screwed up in the past as a country, we treated those people horribly, but those tough conversations have to happen for us to grow as a whole,” Giddens said.

Monslow said he plans to present his petition to the Shawnee Mission Board of Education at the same time as the other petition to show board members they don’t need to be pressured to change the mascot.