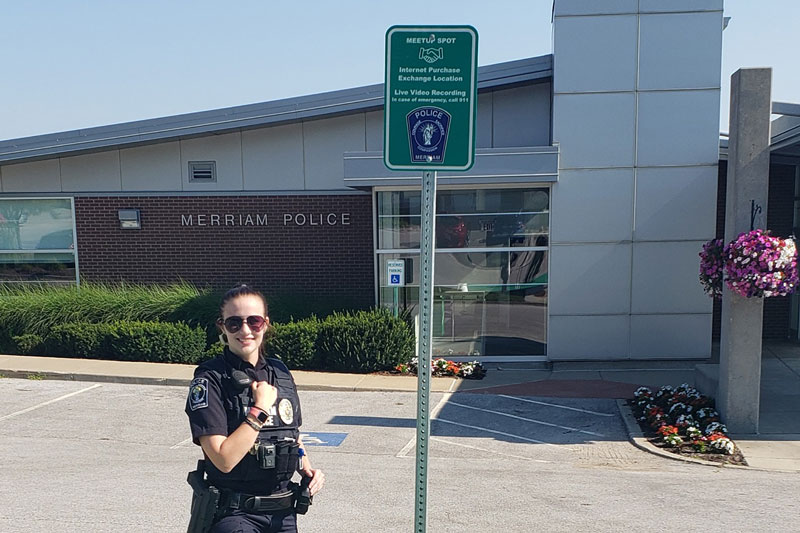 Merriam now has two designated parking spots near the Merriam Police Department that are monitored by a video camera 24/7 for internet exchanges. Photo via City of Merriam.

The city of Merriam announced Wednesday it now has two designated parking spots for the public to safely exchange internet purchases.

The parking spots are located near the Merriam Police Department, 9010 W. 62nd Street, and are monitored via video 24/7. Green signs in the front parking lot mark the internet purchase exchange locations.

We now have a safe spot for you to do internet exchanges! There are two designated parking spots near the Merriam Police Department that are monitored by a video camera 24/7.

Look for the green parking spaces and sign in the front parking lot. Happy selling/buying! pic.twitter.com/U4KtQOplwz

The Small Business Administration recently released new data from the Paycheck Protection Program showing that it has preserved “more than 99,597 jobs in” the Kansas Third Congressional District, according to a press release.

Although the program has helped many Kansans keep their jobs and businesses during a global pandemic, Rep. Sharice Davids is among those who have voiced concerns about some of the loans issued to large, profitable companies.

“I have big concerns about many of the large corporations with deep pockets that we’re learning got these loans,” Davids said in a release. “That’s not who the program was intended for and I’ll keep fighting to increase transparency and oversight to ensure our workers and small businesses get the support they need.”

Sen. Julia Lynn, R-Olathe and Sen. Mike Thompson, R-Shawnee have been appointed to serve on coronavirus-related special interim committees. In a Capitol Report sent out last month, Hawver News reported that Lynn will serve as the chair of the Economic Recovery Interim Study Committee while Thompson is serving on the Special Committee on Kansas Emergency Management Act.