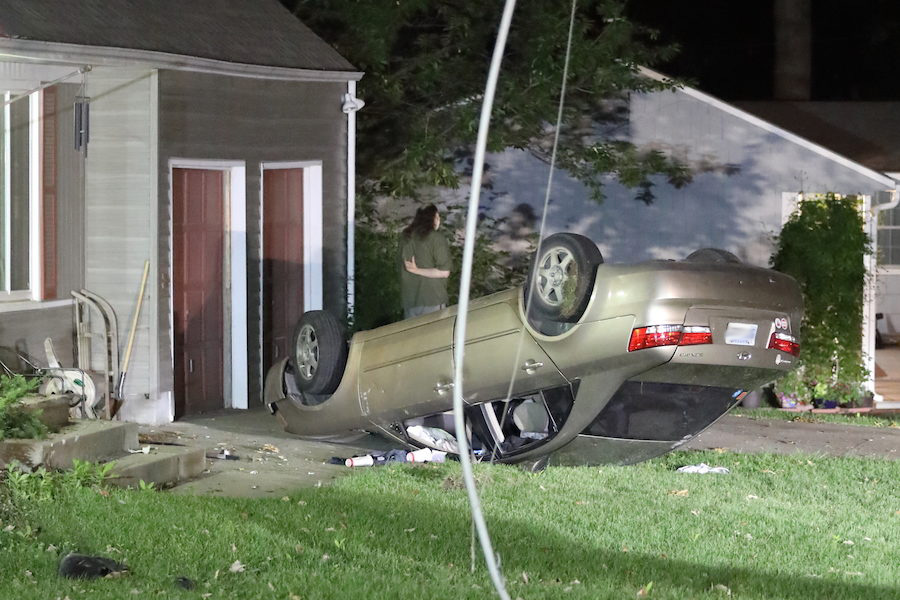 Police radio traffic indicated the car had reached speeds of 81 miles per hour traveling on 75th Street. Officers found the car flipped over in a yard on 74th Terrace near Delmar.

Recorded radio traffic indicates that at 12:49 a.m., an officer tried to stop a vehicle on 75th Street for speeding, reportedly 81mph. The officer informed his dispatcher that the car “failed to yield” and turned westbound onto 74th Terrace.

Captain Eric McCullough confirms that an officer attempted to stop the driver for speeding, and the vehicle fled from the officer.

“The officer disregarded the stop and did not pursue,” McCullough said. “A short time later, the vehicle was located, crashed and overturned in the front yard of a residence in the 4300 block of 74th Terrace.”

The suspect car struck a flagpole and then the concrete front steps of a home, which caused the Hyundai sedan to roll onto its roof.

The officer detained the driver and passenger while requesting Johnson County Med-Act respond to check them for injuries.

Johnson County Med-Act along with firefighters from Johnson County Consolidated Fire District No. 2 responded to the scene. Both the driver and passenger of the car refused transport to a hospital.

The driver, an 18-year-old Lenexa man, was arrested after an officer conducted field sobriety tests.

“The driver was placed under arrest for multiple traffic violations and possession of marijuana,” McCullough said. “He was released after processing.”

He was transported to the Johnson County Adult Detention Center in Olathe, where he was booked and released about an hour later.

The passenger of the car, only identified as an 18-year-old man, was released near the scene.

McCullough says no one else was hurt and no other vehicles were involved in the crash.