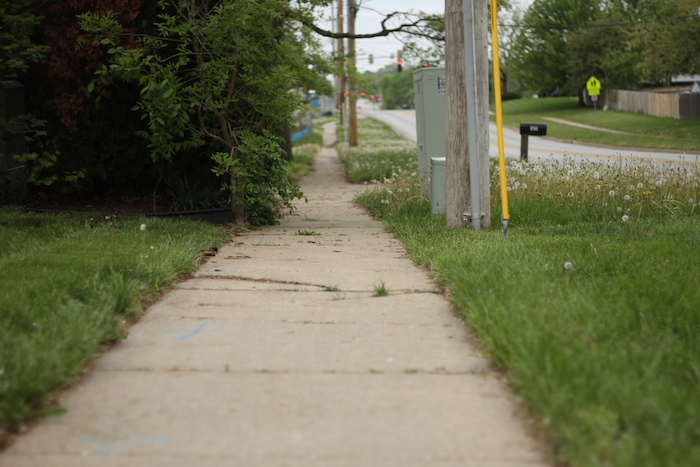 Rehabilitation of Pflumm Road between Midland Drive and the south city limits of Shawnee is slated to begin in August. Shawnee is receiving funding from Johnson County to support project costs. File photo.

Shawnee is rehabilitating Pflumm Road this summer between Midland Drive and the southern city limits.

The $3 million project encompasses a 1.35 mile stretch of Pflumm Road and includes the following:

Paul Lindstrom, senior project engineer with the city, said preliminary plans contemplated installing a traffic signal at 71st and Pflumm, or perhaps removing the stop signs on Pflumm so that north-south traffic did not have to stop.

However, after completing a traffic study and hearing feedback from residents and city leaders, city staff determined the intersection lacks the traffic volume to warrant any changes to the four-way stop at 71st and Pflumm.

Lindstrom noted that motorists are not stopping at the stop signs because there’s little side traffic from 71st, he added.

“By putting in a traffic signal, it will control that better, but the warrants aren’t there — there’s just not enough accidents, not enough traffic, not enough pedestrians, so it doesn’t get the traffic we were anticipating when you count it,” Lindstrom said.

In feedback to the city as well as during a virtual public meeting July 1, residents asked questions and shared concerns about the impact of construction along the route as well as the prospect of installing a traffic signal at 71st and Pflumm.

“That has been the big stink about this project, is doing something with that intersection,” Lindstrom said. “And it would make it more efficient if we were to remove the north and south stop signs, but the city council and city manager made the decision not to address it at this time. We’ll just monitor it later on and see if we need to do anything at that intersection.”

The city is receiving $1,375,000 from Johnson County’s County Assistance Road System program to support the project.

Construction is slated to begin in August and wrap up by the end of this year. Detour traffic routes will be determined at a later date, but Lindstrom said construction will not close the whole project area at once. The road may have to close in some sections while crews complete stormwater improvements.