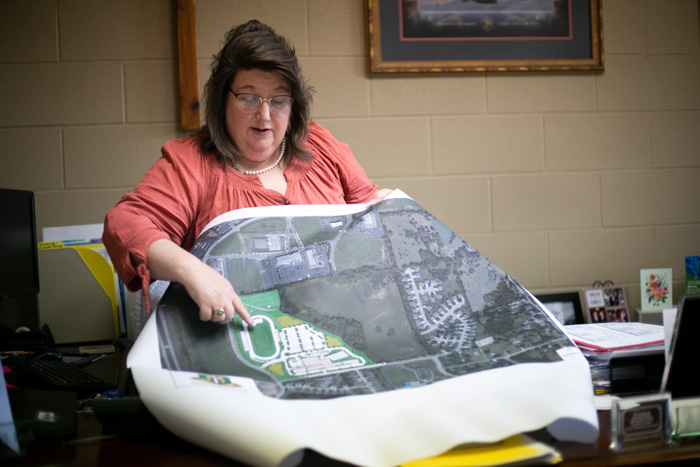 Maranatha Christian Academy, a private independent school in Shawnee, is planning to build a new campus near K-7 Highway and Shawnee Mission Parkway.

The plans call for a new $25 million campus on about 27 acres of land at the northeast corner of 71st and Silverheel streets. The project includes a 130,000-square-foot school building and sports stadium for K-12 students.

Janet Fogh, head of school, said the project brings K-12 students together onto one campus. Elementary students are currently housed on the academy’s north campus at West 63rd Street and Lackman Road, while secondary students attend classes in a space leased from Cross Points Church in Shawnee.

The project also creates more space for teachers to have their own classrooms and increases the academy’s sports facilities, including its own sports stadium, locker rooms and training space. The new sports stadium allows students to play on their own turf; under its current plan, the school leases space from St. Joseph Catholic School.

“We want to give the school their own identity; we don’t want to split anymore,” Fogh said. “Especially, it’s more important for the secondary students to have a sense of ‘this is our school.'”

Academy administrators hope to increase enrollment by 20% with the new campus. The school has about 320 students.

Fogh said the academy purchased the land debt-free thanks to a $5 million donation from someone supporting the school. The academy closed on the property last month.

“I’m just in awe; it’s like God handed it to us on a silver platter and said here, the timing is right, the land is yours, go and make it be something special,” Fogh said. “This is God’s project.”

After nearly three hours of discussion and hearing city staff read public comments into the record, the city planning commission on Monday night unanimously approved preliminary plans and pre-plat as well as a special use permit to allow the sports stadium on site.

The agricultural site was partially zoned commercial highway, so the planning commission also unanimously approved rezoning the site to entirely agricultural so the campus falls under one zoning district.

Here is a bird’s eye view of the project. The dark brown portion of the school building and the sports stadium will be built in the first phase: 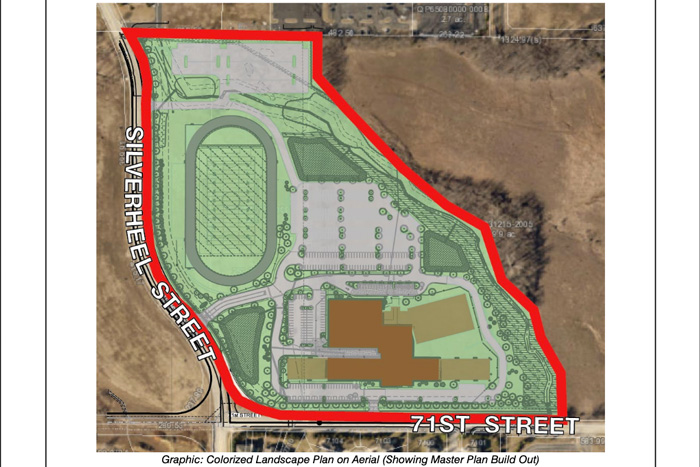 Dozens of residents, several of whom live near the project area, shared both support and opposition for the new campus. A form letter in support had more than 100 signatures, while a neighboring homeowners association shared a letter indicating that a majority of its members opposed the development. Most concerns pertained to traffic congestion, as residents oppose the potential concentration of school traffic backing up onto 71st and Silverheel streets, as well as noise and light impacts from the stadium.

Fogh said access to the elementary entrance wraps around the school building, allowing traffic to queue on site instead of backing up on Silverheel. The exit onto 71st is a right turn only, according to city documents.

The planning commission will consider final site plans at a later date. Planning commissioners and city staff asked the academy and engineers to address open items related to light and sound from the sports stadium.

The planning commission also asked to see improvements in architecture and design that would make the building look less industrial. Academy representatives agreed to look into it but also wanted to ensure that the school building will still look like a school and not a retail or commercial space.

The majority of the project, including the grass field for the sports stadium as well as most of the footprint for the school building, will be completed in the first phase. In the second phase, the school will add a performing arts wing and additional elementary classroom space, as well as artificial turf for the stadium.

Fogh said they hope to break ground in September and start school in August 2022. The timeline for phase two is dependent on funding. The academy plans to discontinue leasing space from Cross Points Church and sell the north campus property across from Swarner Skate Park once the new school building opens.