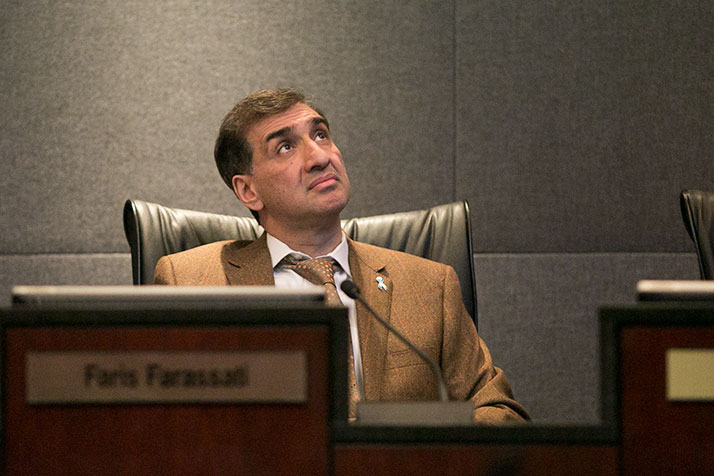 Lyons said he wanted to explain the cancellation after receiving a deluge of emails just before the city council meeting from people who wanted to come to the committee to express their views about $70,000 severance in paid out to a police officer responding to a mental crisis call who ended up shooting and killing a troubled teenager in 2018.

Details of that payment to former officer Clayton Jenison in the shooting of John Albers were just revealed last week. After it became known that the city paid the severance, Councilmembers Farassati and Scott Hamblin asked for an executive session of the council, saying they wanted to be able to clearly explain it to the public. Mayor Carl Gerlach said he has asked for legal advice on whether the council can have such a meeting without violating the agreement with the former employee.

Lyons said the public safety committee meeting was cancelled for an unrelated reason before he received any emailed requests. But Farassati pointed out that this was the second time a public safety committee meeting was cancelled as controversial police-related issues have come up. The last time was when Farassati and Hamblin were pushing for hazard pay for first responders due to the COVID-19 crisis, he said.

Farassati said his constituents have been asking why “every time there is a sensitive item to be discussed the public safety committee  — boom — is cancelled. So the optics of it with all due respect doesn’t look good.”

Lyons lost his temper at that.

“I take exception to what Councilmember Farassati is accusing me of, trying to deliberately hide something and cancel the meeting because I’m afraid to have a public discussion. That is complete and total nonsense,” he said, seconds later characterizing the notion as “nuts” because he was unaware of the emailed requests at the time he cancelled it.

Farassati has had plenty of chances to ask staff for an explanation of the reasoning behind the severance, Lyons said. “You’ve chosen not to do that until now. So I ask you to please get off your campaign stump trying to raise this incident in a disingenuous and unethical way and I will tell you I’m not going to put up with this kind of nonsense going forward.” Farassati has said he will run for mayor.

Lyons said the meeting was cancelled because, due to scheduling problems for a non-bias policing training presentation, there was nothing on the agenda. He said the item could be brought up in a future meeting, though.

Farassati replied, “I’m going to forgive the borderline insults and just get to the facts.”

He suggested that given the demand from people for an explanation, the meeting should be uncancelled. “Please don’t talk about irrelevant issues like campaigns and stuff like that. Keep to the point and answer logically what is being genuinely asked from you and just not try to muddy the water with all due respect.”

“People before the procedures is something we need to learn to exercise.”

Roxie Hammill is a freelance reporter who covers Overland Park city government and the Johnson County Board of County Commissioners for the Shawnee Mission Post.