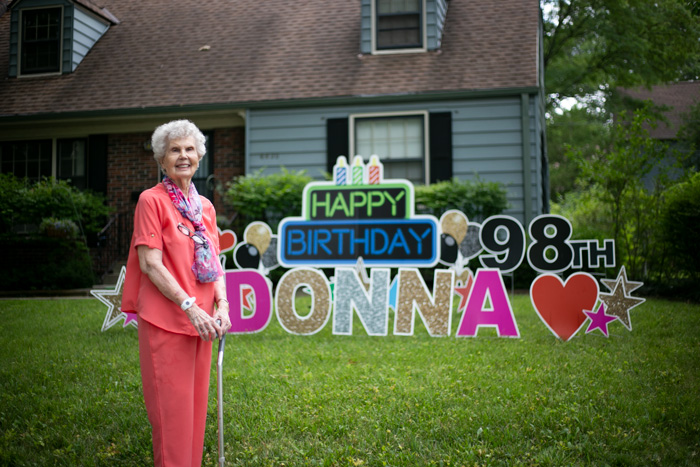 Prairie Village resident Donna Roembach celebrated her 98th birthday on Friday alongside friends and family, who drove by her home on 69th Street to offer well wishes and congratulations.

The afternoon was hot, muggy and hinting of rain, but that didn’t stop the drive-by parade of friends, family, and fellow members of Countryside Christian Church and women’s organization P.E.O. Mayor Eric Mikkelson also dropped by in a city police vehicle.

“I thought it was wonderful,” Roembach said. “I’ve never had anything like that, so it was really great for me. It made me feel very special.”

Donna Esther (WhitWam) Roembach was born on July 3, 1922, the daughter of Mary Belle and Charles O. WhitWam, in Wichita. She and her twin sister, Monna, were the youngest of eight siblings, including a second set of twin sisters.

Donna graduated from Wichita North High in 1940 and Friends University (also in Wichita) in 1944. She was the Yearbook Queen in 1942.

She married T.L. Tex Roembach in 1944. During his time in pilot training for the war, the couple lived in many places across the United States, such as Mississippi, Washington and California.

“It was an interesting time, but we really didn’t get to see much of the country though because we moved from base to base and we didn’t have a car,” she said.

As a pilot in the armed forces, Tex flew over Europe during the post-war occupation of Germany.

The Roembachs had five children together. He died in an automobile accident in 1961; that was a turning point in her life, having to raise their children by herself.

A resident of Prairie Village since 1980, Donna Roembach enjoys spending time with family, including six grandchildren and seven great-grandchildren. She used to travel often to Europe and around the United States. She once took an Alaskan cruise and visited the Bahamas. She also likes reading books, doing crossword puzzles in ink and watching birds.

“I take it a day at a time; don’t really feel like it’s much different than 90,” she laughed. “I’m really lucky to have such caring and sweet daughters and sons-in-law; my youngest son lives with me and he’s a big help.”

She keeps up with her family on Facebook; that’s how she found out about the drive-by parade, which would have been a surprise. Her advice for aging well and enjoying life: “Count your blessings and pray for others.”

Lately, she has also picked up online genealogical research. In fact, the Roembach and WhitWam families have documented much of their ancestors’ early history in Kansas. Some notable facts: