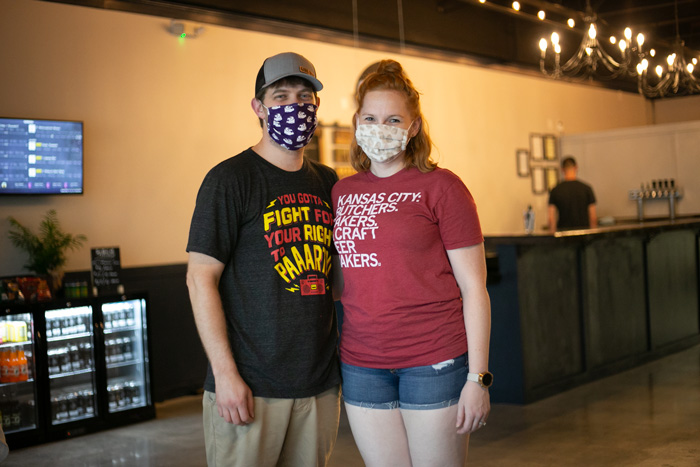 Pat and Heather Davis celebrated the grand opening of their microbrewery, Lost Evenings Brewing Company, in Lenexa the last weekend of June.

The site sat vacant for a few years after plans to expand the neighboring sushi restaurant fell flat. The couple, Pat and Heather Davis, had originally planned to open a microbrewery in Lenexa City Center but later pivoted to this new location.

“It feels good; I’ve wanted to open a brewery for probably five-plus years, and had seriously been trying to do it for the last two,” said Pat Davis. “Of course, none of this was planned, my wife just had our second kid, and it just all happened to come together at the same time, so it’s been a crazy couple of months, but we’re excited to finally be open.”

The Davis family, including their daughter Nora, just welcomed little daughter and sister Bridget into the world.

“It’s very surreal right now, especially during a pandemic and just having a baby, so we look around every day and we’re like we did this, we actually opened a brewery,” added Heather Davis.

The Davis family said the space is large enough to space out tables during the pandemic. Hand sanitizers are stationed throughout the taproom, and staff are asking customers to comply with the statewide mandate to wear a mask when not seated at their table.

Normal capacity is 151, but they have limited seating to accommodate social distancing. Eventually, the brewery will host special events such as trivia night, once the pandemic passes.

To meet the Johnson County’s requirement to make 30% of its revenue from non-alcohol sales, Lost Evenings has partnered with local food and drink vendors, including Gambino’s Pizza in Lenexa, Lucky Elixir Kombucha in North Kansas City, and Polly’s Pop in Independence.

Current hours of operation are 12-9 p.m. Thursday through Saturday and 12-8 p.m. Sunday.