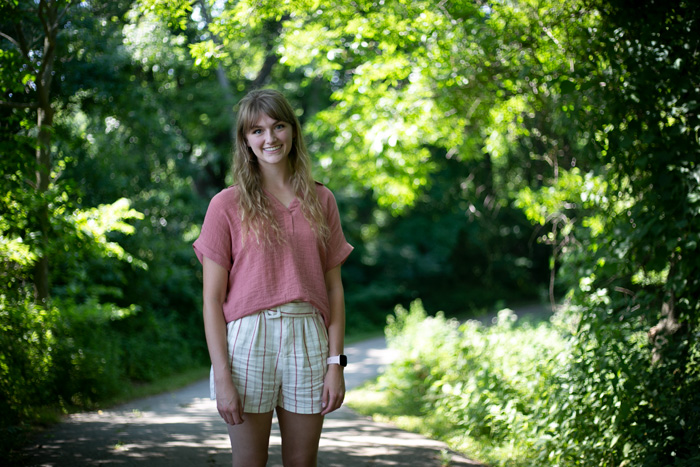 Alli Franken had already discovered her passion for theatre, but singlehandedly choreographing a musical while an undergrad at Texas Christian University in Fort Worth, Texas, helped her find her voice as an artist. The actress is back in town this summer teaching theatre camps at the Culture House in Olathe. A new graduate of the theatre program at TCU, Franken is one of the university’s senior scholars. While in school, she also performed in two mainstage productions and directed a benefit concert for Broadway Cares/Equity Fights AIDS. An Overland Park native and 2016 Blue Valley North grad, she moves back to Fort Worth in a few weeks to pursue a professional acting and choreography career. Her dream is to earn her master’s degree and return to academia as a professor. When she’s not on stage, Franken enjoys being outdoors, reading a good book, watching movies and spending time with other artists.

“Sister Act” was the turning point for me. I came into college eager to be a part of a department that was focused on only creating excellent performers but also great human beings with good hearts.

It did take me a few years to find my place and find my voice in college — as it does for everyone — but I was surrounded by such positive, encouraging people, especially in the faculty. They are so empowering and encouraging. They are the type of people who see gifts in you and call them out and pull them into fruition. That’s really who I want to become in my life.

I absolutely loved it, so the next opportunity I got to do, I was like yes! So then I assisted on “42nd Street,” and they trusted me with choreographing four numbers of the show. It was a really good realization, that oh I can take this into my own and I can do it. I learned to trust myself.

So then, after that, I had to pick my senior thesis project for the honors college, and I knew I wanted to do it in choreography, so I asked the faculty, I said hey I would love to choreograph a mainstage show as my senior project, but to that point, they’d never had a student be the sole choreographer of a mainstage musical yet. They’d only had someone be an assistant choreographer, a co-choreographer. So I was kind of asking a big request of them.

So I spent that whole summer diving into disco music and disco dance moves, and it was a blast in getting just super excited for the story of “Sister Act.” And that fall was really a turning point for me, because the story of “Sister Act” is all about finding the voice that is uniquely yours and using it to bring out the voices in others that maybe are usually unheard and then learning how to combine all those and share it with the world to tell either a beautiful story or to change a culture in a way.

When working on “Sister Act,” I learned to find my voice as an artist. I learned that I needed to be unapologetic with my work and just know that the gifts I had within me were unique to me and that the best way I could serve the community I was in was by sharing those wholeheartedly, without holding back.

And being in that position, I also got to empower the performers I was working with to also find that little glimmer within themselves and pull it out onto the stage and emphasize it for all it was worth.

And I think I have a lot more clarity on the power that we have as artists to give voice to the voiceless and built cultures of empathy, to help people see a reflection of themselves on stage and either find comfort or be challenged or laugh or just find a little escape of enjoyment. “Sister Act” is a show that was full of fun, full of charm, but also it was full of empowerment and strength.

Artists have spent hundreds of hours working to create a story that doesn’t feel like a story, it just feels like life on stage. So when you allow yourself to get lost in the story you’re seeing, that is the most beautiful, honoring relationship to an actor on stage because we can sense it, we can feel it. You can see our hearts on stage that we generously are giving, and so when audience members give their hearts to us too, it becomes this beautiful collaboration of living one story all in the same place.

Shawnee will replace traffic signal at 67th and Quivira, near SM Northwest