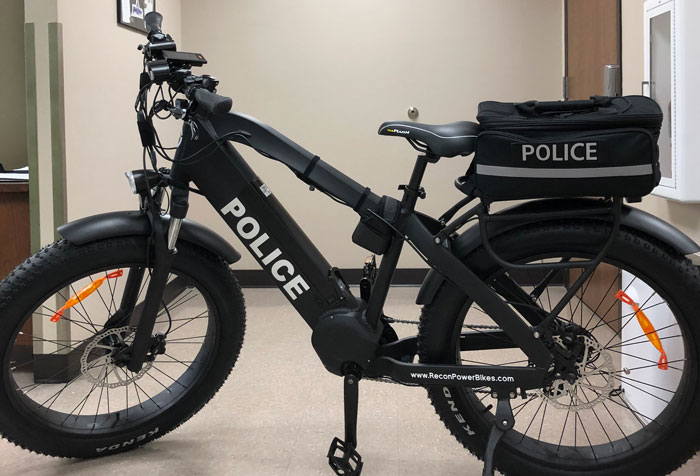 The Roeland Park Police Department earlier this week received a recon power bike unit, which will be in full-service soon.

The recon power bike functions as a regular bicycle, but includes an electric motor officers can use for a quicker response. On average, the fully charged bike will travel approximately 50 miles and can reach up to 30 miles per hour.

Additionally, the bike comes with a siren, emergency LED lighting and is marked as a police unit. The police department is finishing up a few details before the bike is in full-service.

Several Kansas legislators representing northeast Johnson County as well as local community partners have signed a letter to the Kansas Bureau of Investigations urging the state agency to investigate Roger Golubski, a former police detective with the Kansas City Kansas Police Department. Golubski faces allegations including charges of sexual abuse of women, malicious actions toward citizens and framing of individuals for crimes they did not commit, according to the letter dated July 2.

Local legislators representing Johnson County who signed the letter include:

The letter to the KBI reads:

“As you are likely aware, a variety of very serious and troubling allegations have been made in regard to former Kansas City, Kansas police detective Roger Golubski, as well as other members of his staff. These allegations include charges of sexual abuse of women, malicious actions toward citizens, and framing of individuals for crimes they did not commit (specifically in the case of Lamonte McIntyre who was recently exonerated). These allegations have shown a pattern of abuse toward poor, minority (people of color) residents – specifically the people Golubski and his force were employed by taxpayers to protect. Despite the preponderance of information that has been brought forward, Golubski has not been held accountable.

We, the signed members of the Kansas Legislature, along with community partners, ask you today to thoroughly investigate this situation immediately. Golubski, and other members of their force involved must be held accountable for their actions.”

Johnson Drive construction in Merriam to begin next week, to be completed by mid-October

The city of Merriam announced on Thursday construction on Johnson Drive from Kessler Street east to city limits will begin the week of July 6.

Crews will repave the road and put in new curbs, sidewalks and ADA-compliant ramps. Weather-permitting, the project will be completed by mid-October.

TRAFFIC ALERT: Starting next week, Johnson Dr. between Kessler St. to east city limits will get a new look.

The entire project is expected to be completed by mid-October, weather permitting. pic.twitter.com/c4zTaBfpyq