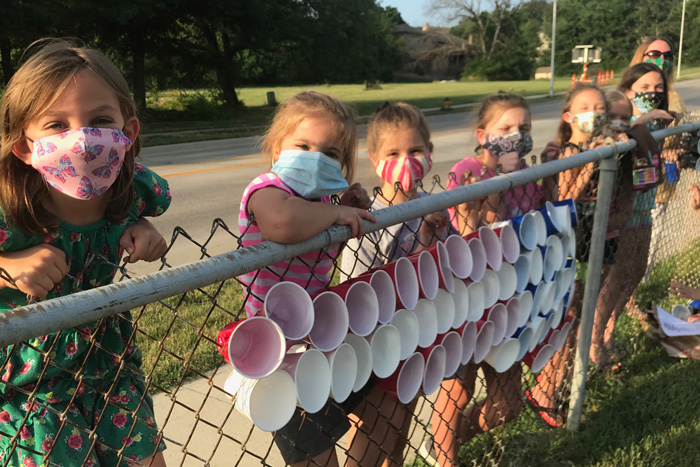 The Girl Scout troops at Mill Creek Elementary are one of 40 participants who decorated their stationary "float" for the Community Days Porch Parade, a twist of the city's traditional parade. Photo courtesy Kristin Archer.

More than 40 Lenexa homes and businesses have decorated their properties as part of the city’s twist on the Community Days parade. This year, the Community Days Porch Parade allows residents to take a self-guided tour through the city to see how the community is celebrating Independence during the COVID-19 pandemic.

An annual hometown tradition since at least the 1970s, the Community Days parade typically takes place in Old Town Lenexa. But 2020 has not been a typical year, as the coronavirus outbreak spurred widespread cancellations and postponements.

“It’s been a really popular event every year, but then of course this year since it’s not safe to gather for events yet, and we couldn’t hold the traditional parade, we wanted to come up with some fun new way to help the community celebrate Independence Day,” said Susanne Neely, recreation supervisor for the city.

Thus, city staff turned the tradition into the Community Days Porch Parade, during which residents and businesses turn their properties into “floats” for neighbors to drive by and enjoy on their own schedule.

“It’s kind of like a reverse parade, where people decorate their front yards and porches and then families can go on their own self-guided tour to see the decorations,” Neely said.

Here’s a map of the self-guided tour. The parade theme is “There’s No Place Like Home.”

“That was actually the theme we were going to use for our traditional parade; it’s such a fitting theme this year,” Neely said, noting it would have been last year’s theme, but the parade was rained out.

Businesses like Gomer’s of Kansas and Urban Air, faith and civic groups like Lenexa United Methodist Church and the Isadore Hoehn VFW Post 7397, and dozens of families have decked out their buildings for the celebration. Some councilmembers are also participating.

Local Girl Scouts — who normally participate in the parade — decorated the fence at Mill Creek Elementary on 79th Street.

Kristin Archer, a Lenexa resident and Girl Scout troop leader, said that with permission from the principal, Girl Scouts across multiple troops came out to decorate the fence along their school for the Porch Parade. After collaborating on some ideas, the girls ultimately settled on designs that show pride for their school, the Girl Scouts, their city and their country.

“We’re not just celebrating America; we’re also celebrating our pride in our community,” Archer said, noting that the girls used STEM and art skills to come up with decorations that worked for their idea. “I hope that this brings some happiness to people as they see it driving down 79th Street. We can’t be together to celebrate like we normally are for Fourth of July, but this is at least a step toward coming together as a community and celebrating together.”

Decorations will stay up through Independence Day on July 4.