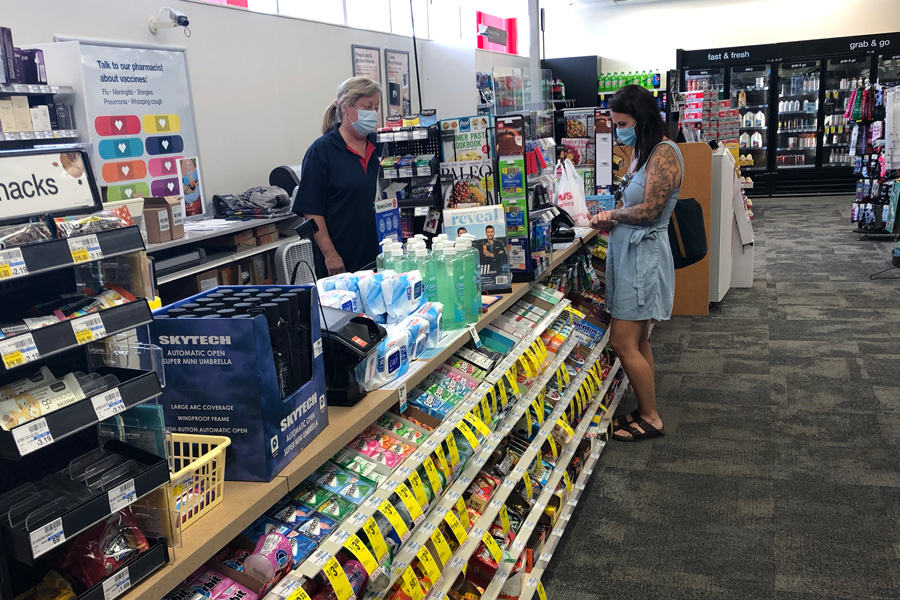 Employees and customers at CVS in Overland Park wore face masks Thursday. On Friday, facial coverings will be mandatory in Kansas under an order from Gov. Laura Kelly.

After a two-and-a-half hour discussion that included angry comments from both sides of the issue, the commission voted 4-2 to support the requirement that beginning Friday, masks must be worn in public spaces. The yes votes were Commissioners Janeé Hanzlick, Becky Fast, Jim Allen and Chairman Ed Eilert. Commissioners Steve Klika and Mike Brown voted against and Commissioner Michael Ashcraft abstained, saying he couldn’t decide which side to support.

Commissioners in the majority said they were swayed by presentations from Public Health Director Sanmi Areola, PhD and Public Health Officer Joseph LeMaster, MD, MPH, who described the situation as “a train wreck in slow motion.”

The emergency meeting to consider the order was also attended by numerous people – many of them opposed – who waited in the hallway for their turn to speak in the socially distanced hearing room. At times the crowd outside hooted, applauded or booed, especially when points were made against the mask order.

Some 40 people signed up for a chance to speak. Opponents listed a wide range of fears about the mandate, from restrictions of personal liberties to vaccines to the economy. Supporters of the mask order said it would help get the economy moving quicker and that people should wear masks to protect older people and those with health conditions.

The county’s public health experts were adamant that the order is needed and two hospital officials urged the commission to endorse it.

The public health doctors shared statistics that painted a grim picture of COVID-19 on the upswing in the county, as it has been in many states. The county is seeing a record number of new cases, with 106 reported July 1. Last week the percentage of positive cases took a sudden jump, up 24 percent compared to previous weeks of being up 13 and 14 percent, Areola said.

Up until now, long-term care facilities had been the biggest hot spots for the coronavirus, but the new surge has happened outside those facilities and among a younger group of people, and it cannot be explained simply by an increase in testing, Areola said. Labs are becoming overwhelmed, he said, and more hospitalizations are expected to follow.

“We cannot afford to not control this now,” he said. “If we don’t, the impact will be huge as we’ve seen in other places,” he added, saying the risk is higher now in Johnson County than it has been at any other time.

LeMaster has said that wearing masks has been scientifically proven to prevent the spread of the coronavirus and is a key way to get the economy moving again. At an appearance on the University of Kansas Health Systems daily briefing this week, LeMaster said, “I am willing to predict that if we do not do this the numbers will continue to increase and they will continue to increase in the Kansas City area, and that spillover effect will cause hospitals to be overwhelmed and we will have to have another shut down. It is only a matter of time. It is predictable and it will happen.”

The commission’s action was preceded by some procedural haggling, and some commissioners objected to a lack of time to study the issue. Ashcraft said both sides made valid points but that he was too torn and needed more time to digest the data. Kelly’s order was still being tweaked as the discussion went on.

The commission had not intended to meet Thursday, but Brown said he asked for the emergency meeting. However, he objected to the short time period to consider options before the order goes into effect Friday. Commissioners voted to abide by the order to give clarity to residents for the coming week, but said they’d revisit the issue

Actions surrounding masks and business reopening rules have often become heated and emotional and the meeting today was no different. But bringing the commission back into the hearing room for public comments meant that this time there was opportunity for organized efforts by citizens to sway the commission. The Conservative Republicans of Western Johnson County asked its followers to turn out at the hearing room to oppose the order.

Those opponents presented a variety of concerns and at one point a bit of theater, with one man showing up with a plush shark head as an improvised mask, clutching the American flag.

Sharon Madigan of Overland Park said the shutdowns have resulted in many lost opportunities for her son to pursue his goals, and that the mandates are an example of “tyrannical government.” Others were against vaccines in general or said they believed that mask wearing was ineffective or would harm the wearers.

Another woman said she has never worn masks. “I think everybody’s free to do whatever they want to do,” she said. “I’m willing to take the risk, if there is a risk. I don’t care. Let everybody make their own choice,” she said, concluding, “I’m not afraid of death.”

But many supporters of Kelly’s order also had points to make. Victoria Birch, who said she works in a long-term care facility, implored the commission to consider elderly residents who have been locked in and unable to see visitors for the duration. “The one thing you are not hearing or seeing is that these residents are upset because they cannot see their family. Residents are dying because they’re lonely and they think their families have abandoned them when they haven’t,” she said.

Sophia Loveland, 17, of Overland Park said if more people wear masks, it will protect members of her family, such as her grandfather with cancer and her 103-year-old great-grandmother, from getting the disease. “Wearing a mask is not difficult,” she said. “I implore you to uphold Governor Kelly’s order.”

Commissioners split along familiar lines they have formed since the reopening discussions began. Klika wondered how the order would be enforced and repeated his concerns that decisions are being made based on fear, not data.

“The population is going to be infected by this virus. It’s a question of who can deal with it and who cannot deal with it,” he said. The most deadly effects are on the vulnerable population, he said. “To the rest of the population we have to at least allow it to run its course, and hopefully individually we’re developing our own basic immunities to this.”

Brown, who has been a long-time critic of the county health orders, said the mask order is “back-door” shutting down Johnson County. On his Facebook page he called the governor’s order “horrendous.”

Fast and Hanzlick said the uptick in cases justified the order. Hanzlick said masks have bipartisan support now that Vice President Mike Pence and Senate Majority Leader Mitch McConnell have spoken in favor of them. Her comments were interrupted with hoots from outside.